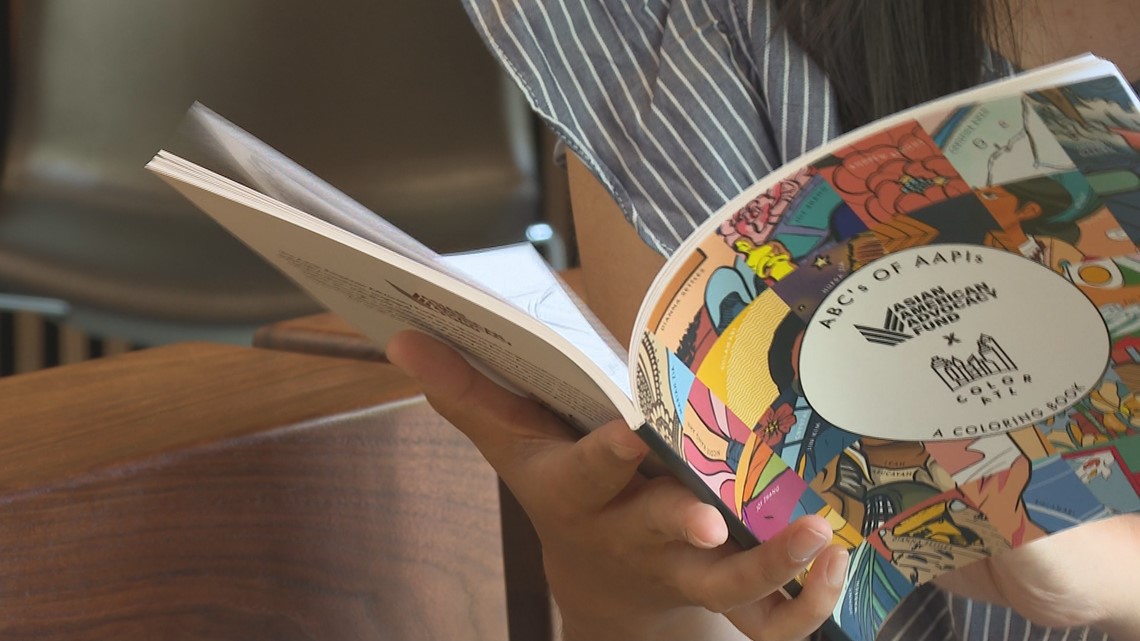 The Asian American Advocacy Fund has created a coloring book to help empower members of the Asian community and teach others about their history and culture.

The Asian American Advocacy fund launched the ABC of AAPIs in May. The coloring book reimagines the alphabet using notable figures and icons that are important to the AAPI community.

“After the spa shoot in Atlanta, which really touched a lot of Asian Americans, especially the women here, we brought together a lot of different creatives from all across the media in Atlanta. And we decided that we wouldn’t didn’t want to be defined by our trauma, but we wanted to celebrate and showcase our culture and heritage,” Arah Kang, artist and one of the creative directors of Asian American Advocacy Fundtold 11Alive.

The project was designed to help the community heal in the wake of the spa shooting and years of racially motivated attacks on Asian Americans. Kang explained that the coloring book is designed to educate and empower, a consensus that kept coming up when she initially reached out to different artists about the project.

“All we really had was maybe a line or two or a paragraph in our history books, just to talk about, like the Chinese built a railroad. And we are so much more than that” , she said.

Along with his colleague, Kavi Vu, Kang worked with underground artists to bring the project to fruition. The collaboration included around thirty artists, writers and students.

One of the artists involved in the project was Leah Abucayan. The California native and Georgia transplant told 11Alive that her letter had a specific intent.

“I specifically chose the letter P for Philip Vera Cruz because I wanted to represent my Filipino heritage. Being from California, I actually know people who are generationally related to people who worked with Philip Vera Cruz in the movement of agricultural workers, so that was something that I really paid tribute to,” Abucayan said.

She has also been busy working on another project, a mural on the Buford Highway in partnership with Living Walls. Recently, she says, she has wanted to do more with her art.

“Since COVID happened and like everything with Black Lives Matter and Stop Asian Hate, I’ve just transitioned into using my art platform and seeing how much of an impact it’s had on social media,” said added Abucayan.

Contributing to the coloring book, she says, was another way she did it. She also enjoys creating something that will help give future generations something she dreamed of as a child.

“It’s surreal because it’s something that I know we all wanted when we were kids, to feel represented in, like, a coloring book or some kid thing,” she said.

In addition to the book launch, the project includes a 150-foot-long mural along the Atlanta Beltline. The installation, which will be on display until June 30, places the sketches of artists like Abucayan on a larger platform.

In keeping with the mission to educate future generations, local students were also contacted about the project. Melanie Zhang, an 11th grader at Westminster Schools in Atlanta, told 11Alive she was eager to get involved.

“I volunteered and researched the letters M and J, and that’s really how I got involved,” she explained.

Zhang is a member of his school’s East Asian affinity group called Mooncakes. The organization’s educational advisor helped get Zhang and her classmates involved. It was a learning experience in more ways than one.

“The one I researched for, Jhumpa Lahiri. I didn’t know her, and I think I really enjoyed learning about her when I was researching.”

Zhang added that she hopes the book will give people who don’t identify as AAPI the chance to learn more about the diversity that exists in the community.

“I think that’s what makes this book so important, because it really teaches people, not just in the AAPI community but also outside of the AAPI community, that many Asian Americans have really had a significant impact on American history,” she said. “And I don’t think a lot of people are aware of that because Asian-American history isn’t really covered in typical history lessons in school. And I think it’s just great that we can recognize them and share that with everyone.”

ABC’s of AAPIs coloring book is available for sale here.

Letters to the Province, May 27, 2022: America’s Gun-Loving Culture Is the Culprit