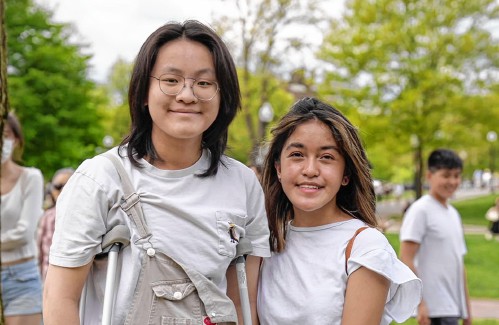 AMHERST — A junior from Amherst Regional High School is playing a key role in advocating for a new law that would require public schools to teach ethnic studies and racial justice. The bill, pending in the Legislative Assembly, also aims to achieve a more diverse faculty.

In her role as a member of the state’s first Asian American and Pacific Islands Commission Youth Council – and the only representative of Western Massachusetts teens – Sea Kay Leung recently attended a rally in Boston where she spoke about the challenges she faces getting enough support in a rural area where resources are targeted at college students rather than students her own age.

“Western Massachusetts offers almost no safe space to go,” Leung said in a phone interview this week, noting that Boston is too far to venture out on a regular basis. “There needs to be a safe space, not only for young Asians, but also for other students of color.”

A longtime Pioneer Valley resident who lives in Belchertown, Leung said she knows from experience how her Chinese-American identity was largely absent from the school curriculum, but she also had positive feelings about some aspects of education in Amherst.

“I want people to know that when I was younger, my freshman teacher had a Chinese New Year festival, and that was the first time I felt accepted in the community,” Leung said. “I felt confident in my identity as a Chinese-American.”

While participating in AAPI Heritage Month activities on the Boston Common, an event to promote unity, solidarity and belonging, and to commemorate Asian victims of violence, Leung joined commissioners, staff members and other youth advisers. The event was organized by the New England Chinese American Association, the Coalition for Anti-Racism and Equity and the Boston Foundation’s Asian Community Fund.

Organizers wrote on the commission’s Facebook page thanking Leung and another youth council member “for speaking forcefully about their own experiences and struggles as Asian Americans. We are so proud of them. and it was inspiring to see them speak their truth on stage.

Leung said she will also work with Richard Chu, professor of history at Five College at the University of Massachusetts, and Leo Hwang, associate academic dean, CNS Advising, at UMass, who were named two of the AAPI commissioners of the western Massachusetts earlier this year. . Her hope is to give a voice to young Asians in the region so that they can be better represented in legislative actions.

Chu wrote in an email that the support he and Hwang can offer will come in many ways, such as funding related activities or programs, or working with city or state officials to promote teaching AAPI history in grades K-12. Chu said he would listen to what Leung and other members of the AAPI community see as important issues they face.

“In terms of specific areas where she can make a difference, one example she and her cohort can set is to advocate for a more inclusive curriculum and environment in their schools by hiring more AAPI teachers, adding courses that foster critical understanding and awareness of AAPI’s history and issues, or creating curricula that recognize and celebrate AAPI’s legacy,” Chu said.

Superintendent Michael Morris mentioned Leung’s role on the Amherst Regional School Board, noting it as an example of impacting lives beyond Amherst.

“(She is) a great ambassador for our school district as well as the entire state,” Morris said.

On May 16, Leung was among young people who met with two members of the Asian House Caucus, Rep. Tackey Chan, D-Quincy, and Rep. Vanna Howard, D-Lowell, for a conversation about Asian American identity, with the young advisers. able to share their struggles with growing Asian Americans.

They heard stories from both representatives about their own journeys in politics and how they overcame their personal experiences to stand up for their communities. After about two hours of discussion, Chan took the Youth Council members on a mini-tour around the State House.

In Amherst, the city council issued a proclamation, similar to one issued by Governor Charlie Baker, proclaiming May Asian American and Pacific Islander Heritage Month, with the local resolution noting that 18% of the The city’s population identifies with these groups and that they should be celebrated. The resolution also recognizes the racism and xenophobia they face, and how they are consistently overlooked and undervalued in the teaching and study of American history.

As part of the city’s work, a virtual celebration was held earlier this week in which local Asian Americans recounted their own time in the city, including family of the first Cambodians to arrive in 1981. Although Leung did not participate, she appreciates that such a forum took place.

Next, she hopes to form an AAPI club at school, observing that it should help improve the identity of Asian Americans.

Scott Merzbach can be contacted at [email protected]