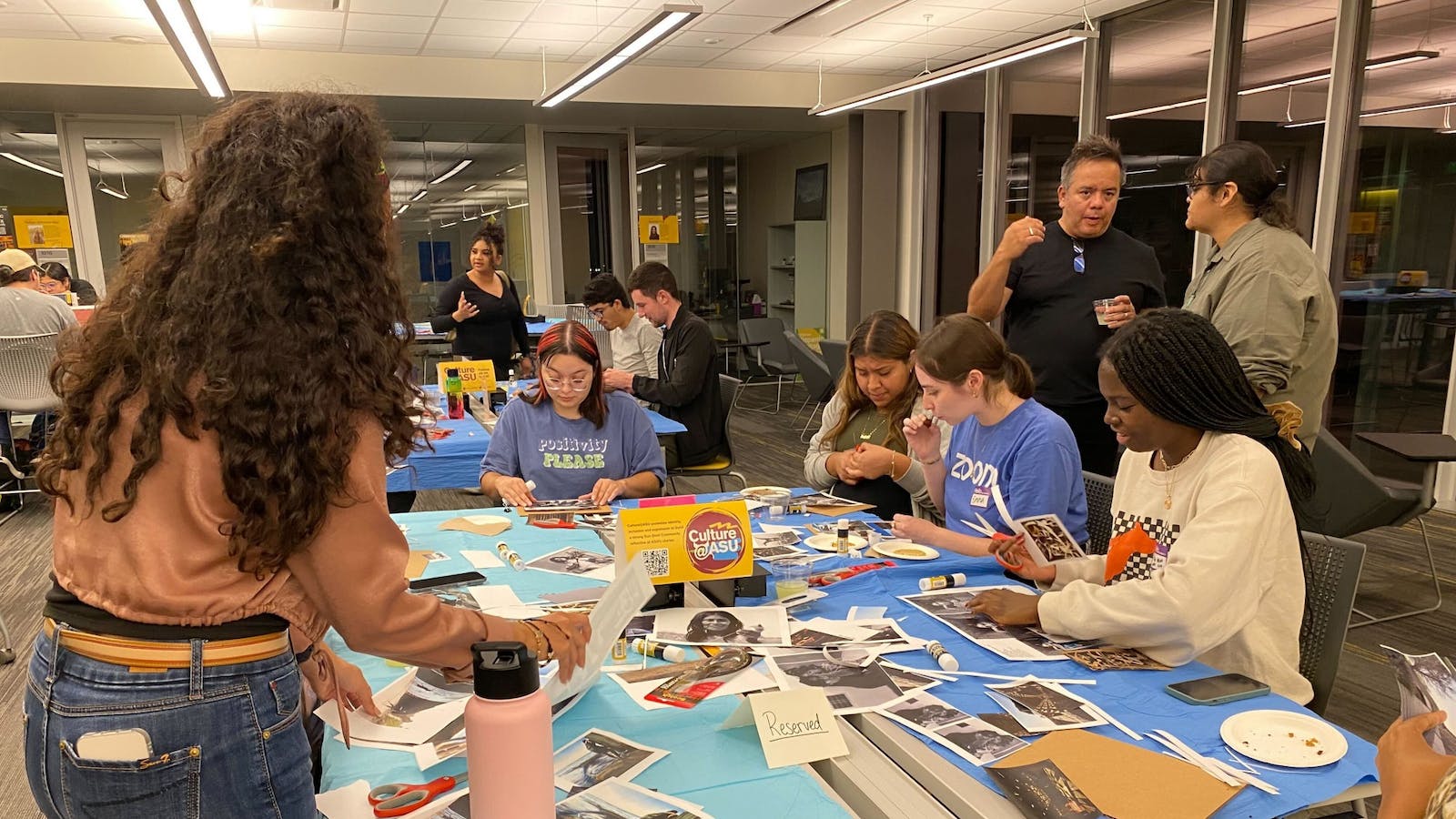 Students gathered around the Tempe Multicultural Communities of Excellence space decorated with papel picadosand assemble collages of images representative of Latin American culture as part of one of ASU’s events for Hispanic Heritage Month.

The students had the opportunity to listen to a lecture by José Bernardi, Associate Professor of design school, who spoke about the importance and impact of Latin American culture and civilization on design. Following this, students were free to connect with their peers and create collages using Latin American images and motifs.

Hispanic Heritage Month celebrates the contributions and influences such as the history, culture, and accomplishments of Hispanic Americans, September 15 through October 15.

The Department of Culture and Access to Herberger Institute for Design and the Arts, The Council, Multicultural Communities of Excellence, Cultural connections and Justice Design Initiative hosted the event, titled “Collage Night: Design in Latin America,” on September 21 as part of Hispanic Heritage Month.

As students gathered over crafts and snacks, Stephanie Martinez Ramos, a second-year communications student and member of El Concilio, said it was important not only to give students a voice, but also to enjoy activities and discover new things.

“Latin America, and everyone, is kind of like a collage of people and cultures, and everything that comes together forms a perfect mural or picture,” Martinez Ramos said.

“The Herberger Institute, you know, we’re made up of artists, and not all artists, but a lot of artists are about diversity and that’s an important aspect,” said program coordinator Rhett Etherton. of the Culture and Access department at Herberger. .

Herberger decided to become more involved in creating events to celebrate culture because of its students, faculty, and staff.

“A lot of our students are very active,” Etherton said. “As some of these issues became more prominent, I think our students were even more focused on wanting to create initiatives to help diversity and help support people.”

Etherton said Herberger’s setting up of these events is not the ultimate solution to social problems, but it is something that contributes to change.

Leo Pardo, director of marketing and communications for The Design School, said the aim of the event was to educate the public and students about the different types of design in Latin America.

“The School of Design is constantly trying to find new ways to incorporate diversity into our education and into our outreach programs,” Pardo said.

The department plans to continue to participate in the celebration of cultural events and heritage months, Etherton said.

Martinez Ramos also said that collages should help students find a bit of themselves represented through their works.

“Looking around, everyone has a different way of expressing themselves, you know, rearranging photos,” Martinez Ramos said. “It’s like a representation of what makes an identity or what makes a group of people.”

Continue to support student journalism and make a donation to the state press today.