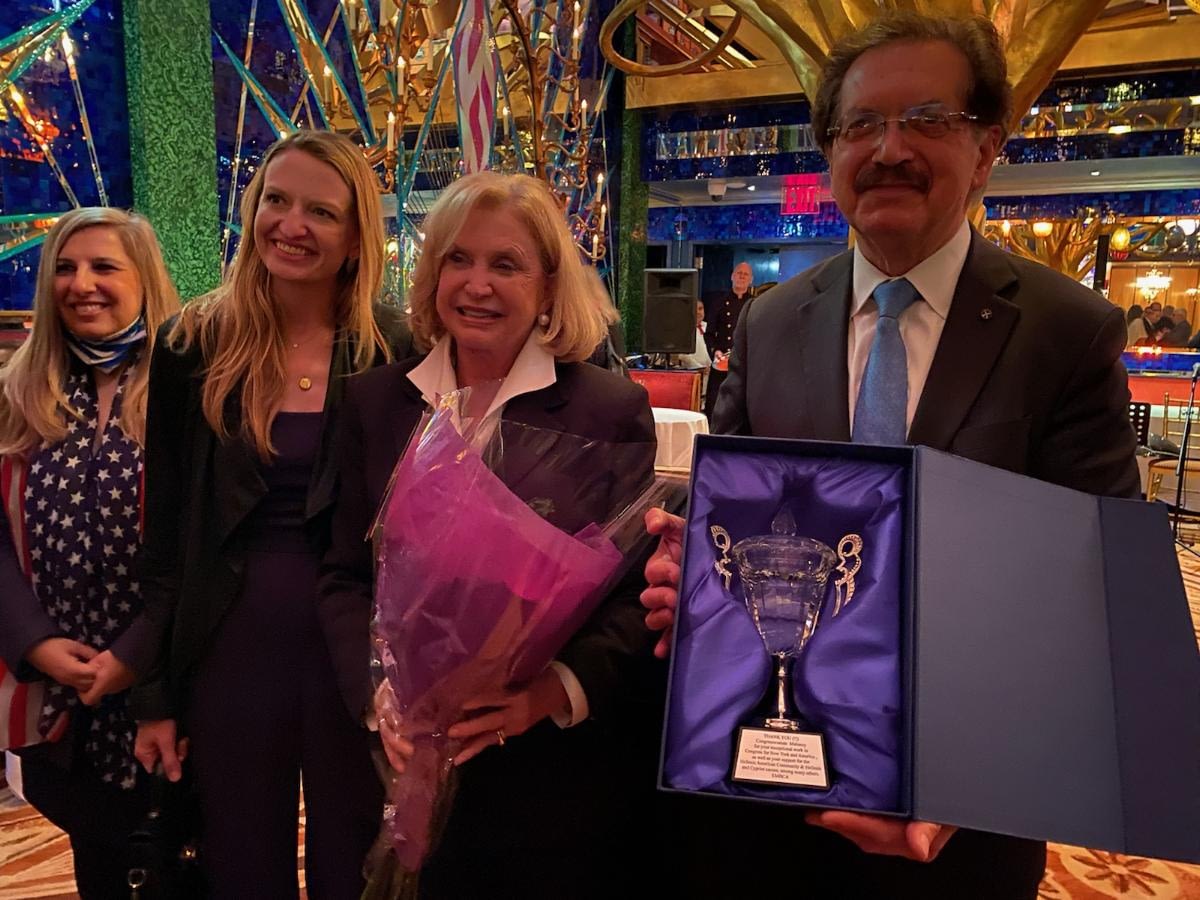 NEW YORK — Congresswoman Carolyn Maloney was honored by members of the Greek-American community at an event hosted by East Mediterranean Business Culture Alliance (EMBCA) founder and president Louis Katsos. is held at the Russian Tea Room in Midtown Manhattan on November 3.

Katsos delivered the welcoming remarks, highlighting Rep. Maloney’s many years of service to the community and her extraordinary career in Congress, including sponsoring most bills such as the James Zadroga 9/11 Health Care and Compensation Act. , his bill to provide health care and compensation for 9/11 first responders, residents and workers near Ground Zero. The 9/11 Victims Compensation Fund was permanently extended with the passage of the Never Forget the Heroes: James Zadroga, Ray Pfeifer and Luis Alvarez Act Permanent Authorization of the Victims Compensation Fund Act victims of September 11 in the summer of 2019.

Maloney’s efforts have brought billions of dollars to New York for major infrastructure improvements such as the Second Avenue subway and the East Side Access project, creating jobs in New York State. Katsos also pointed out that Maloney, co-chair and co-founder of the Congressional Caucus on Hellenic Issues, was also a member of the EMBCA American Hellenic Revolution Bicentennial Celebration Committee, which highlighted the longstanding relationship between the United United and Greece. He also noted that his friends in the Hellenic community gave him the nickname “Bouboulina” after Laskarina Bouboulina, one of the great heroines of the Greek War of Independence.

First elected to Congress in 1992, Maloney has many accomplishments in financial services, national security, the economy, and women’s issues. She is currently chair of the House Committee on Oversight and Reform and former chair of the Joint Economic Committee, the first woman to hold both positions.

Katsos said that “we welcome this opportunity to thank her for being a champion of shared Hellenic and American values ​​- freedom, democracy, human rights, rule of law and religious freedom – we look forward to continuing to work with her. …as much work remains to be done and together we will write with her the next chapter of her book on the achievements of American leadership.

“Philotimo is a Hellenic word that comes to mind when you think of the deputy,” Katsos continued. “Its etymology comes from the word ‘philo’ – an aspect of love, and ‘timos’ – which means honor, it is best translated as love of honor which means to show respect, appreciation, and have l honor and respect for those who are worthy. “AXIA” is another word that comes to mind to designate the value of an individual, in particular, our MP. Her philotimo demands that we pay tribute to the one who is more than worthy of our respect, admiration and love. Join me in repeating – ‘AXIA’, ‘AXIA’, ‘AXIA’ – in thanking our beloved Bouboulina, MP Maloney.”

Katsos then introduced Costas Tsourakis to perform the national anthems of Greece and the United States.

Maloney then thanked everyone in attendance and talked about connecting with the Hellenic community during her first campaign for Congress in 1992. She noted that “one of the first things I did when I went to Congress was to find the Hellenic Caucus, I wanted to reimburse the Greek community, and one day I went to work and there were five members of the Greek Parliament in my office protesting what Turkey was doing in America with votes harmful to Greece and we would fight and muster all the votes in a bipartisan way to defeat him and I said…we have to organize ourselves so I went to [then-Archbishop] Iakovos for his spiritual leadership, he blessed the idea, he liked the idea.

The controversy over the island of Imia was still going on at this time. Maloney said: “and it was just an outrageous act every day and I now want to say that the Hellenic Caucus is the second largest Caucus in Congress, preceded only by the Human Rights Caucus, and I’m very, very proud that they didn’t pass a single anti-Greek question, they don’t even go to the floor anymore, because we have the votes in our caucus to undo their actions.

Maloney pointed to the recent victory with the defense budget that no money should go for F-16s for Turkey, and any money that goes to Turkey for defense, since it is still considered an ally of the United States, “cannot be used against Greece or Greek borders or Greek areas.

She noted that “Macedonia is Greek” and that the fight continues for justice for Cyprus. She spoke of her recent visit to Greece where she received an honorary degree from the University of Patras and met Prime Minister Kyriakos Mitsotakis, calling him “a forward-looking leader for Greece”.

Maloney said she was thrilled to invite Mitsotakis who was the only foreign dignitary to appear before Congress in person this year where “he received so many standing ovations from both sides of the aisle, it was truly inspiring. . He made a brilliant speech.

She also spoke about the return of the Parthenon Marbles, mentioning her recent visit which inspired her to file an invoice for the return of the Parthenon Marbles. “You see with your own eyes and in the researches of these scholars, it will make you sick to your stomach, they went with saws and hatchets and removed the marbles from this sacred place [building]it’s considered one of the wonders of the world and it shows how they basically destroyed it, took them out, so I’m not going to stop until they’re returned to their rightful owners.

“We are making progress,” Maloney said, adding that “I think we should put in a resolution in every country in the world that the Parthenon Marbles belong to Greece and should be returned, because Western culture is in debt. of gratitude to Greece, a culture that we can never fully repay. Whenever the reins of government change hands peacefully, anywhere in the West, we must be deeply grateful to the Greeks for their invention of democracy, and every time you go to the theater or marvel at an Olympic competition, we have the ancient Greeks to thank.”

The Parthenon Marbles “were created by the Greek people, they are Greek treasures…they belong to the Greek people, and I’m not going to stop until I bring them home to Greece and I have a pretty good record to get things done,” Maloney concluded.