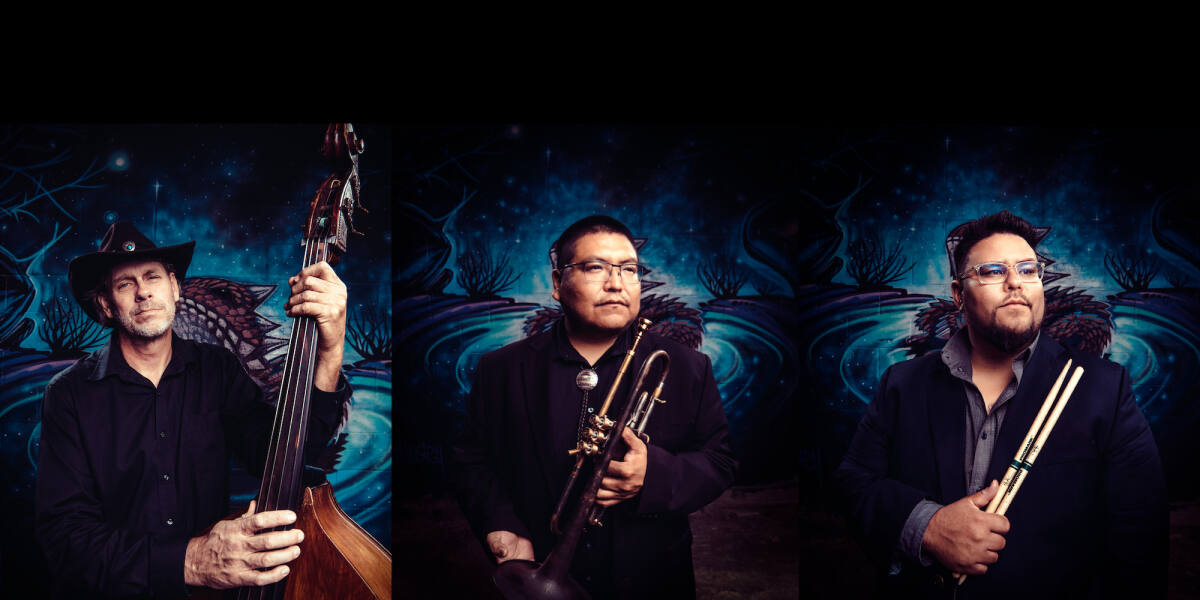 How does a band get a name like DDAT?

But the group continued to evolve. First, the group was joined by rapper Def-i, causing the name change to DDAT. The new name is still in use after his departure last year.

Since then, another leader and rapper, James Pakootas, has also come and gone.

But even with line-up changes, DDAT continues to span genres to produce a sound all its own, spanning jazz and hip-hop, with heavy Native American influences.

You can experience DDAT’s unique sound at the band’s concert on Saturday, September 24 at Weill Hall in the Green Music Center in Rohnert Park. The group will perform with the Sonoma State University Symphony Orchestra, led by conductor Alexander Kahn, in a tribute to Native American composers.

“One of our projects is original songs arranged for DDAT, which will be accompanied by an orchestra,” Anderson said.

The concert will include two original pieces by Lakota Sioux composer Franklin Piland, developed in collaboration with DDAT: the “DDAT Suite” and the world premiere of Piland’s “IKTOMI”.

The group began planning for the program with Sonoma State and the Green Music Center after meeting with their representatives at a music education conference in New York, said Anderson, who works with student musicians at the San Juan College in Farmington, New Mexico.

The Green Music Center concert was originally scheduled for last November but was delayed.

“I had COVID, so we had to reschedule for three days before leaving,” Anderson said recently by phone.

The September 24 performance will follow a week-long residency for DDAT at the university. The group will work with freshman jazz and music students and rehearse with the Sonoma State University Symphony Orchestra to prepare for their performance together.

The trio will also visit a music classroom for a demonstration and discussion, connect with a communications class on public strategies for the entertainment industry, and perform at three elementary schools in Cotati-Rohnert Park.

Composer Piland will join them for residency activities and will also work with university composition students. It’s all part of the band’s ongoing efforts to broaden the public’s understanding of Native American music and culture.

Anderson draws his influences from his own Native American origins. He is a member of the Navajo tribe and grew up on the Shiprock Reservation in New Mexico. He began his music career in 2010 after attending Eastern New Mexico University in Portales.

“The band has definitely evolved since we started,” Anderson said. “We didn’t find our style right away, but we had a good idea of ​​the sound we wanted to get out of it. Now it’s a combination of native sounds from my culture and newer styles.

In his music, Anderson turns to the traditional songs of the Diné, the Navajo preferred name for their nation, meaning “The People” or “Children of the Holy People”.

” I did some research. In the Diné we all have different songs – for work, for dancing, for spring, for all occasions. Diné spinning songs are specifically designed to create new songs,” Anderson said. “They are usually performed with a circle dance. It’s a great way to include my culture in our music.

Out of respect for tradition, Anderson said he approached tribal elders for their thoughts on his use of old themes in new music.

“I found their reaction shocking, because they were all open to it,” Anderson said. “Outsiders tend to think that there are simple rituals in our culture. When I brought up the idea that there might be disputes over the appropriation of tradition, the elders kind of got together. Anything that represents our culture in a positive way, they’re all for it.

Elders said that traditional songs are just stories and there will always be new stories.

“We want to treat people the right way, greet each other and have the right manners for the tribe,” Anderson said.

The other two members of DDAT are not from Native American cultures but mainly from the world of jazz.

New York-born bassist Michael McCluhan counts Charles Mingus among his influences. Drummer Nicholas Lucero, born in Albuquerque and raised in southern Colorado, is inspired by the music of Chick Corea and John Coltrane.

The band’s style has changed over time, Anderson said.

“We tried to play jazz standards for the first two or three days, but we knew it wouldn’t work. We sounded like every other jazz combo,” he recalls.

So they turned to their individual interests, including but not limited to Anderson’s Native American heritage.

“Our drummer was into Latin funk, and our bassist had that Grateful Dead style of jamming,” Anderson said.

“In 2015 we started trying to work with rap and spoken word,” he said. “We immediately got a lot of attention with that and the native tribal sounds.”

The trio doesn’t have a spoken word performer as a member at this time, but their sound is still evolving, Anderson said.

“We’re still in touch with poets, rappers, and spoken word artists,” Anderson said. “It allows us to work with people in the communities we visit. We can bring them on stage with us.

Since February, DDAT has been busy with multiple tours and new projects, he added. And they continue to surprise the public.

“We are always called jazz, hip-hop or funk. Music isn’t really one of those,” Anderson said.

“Then people come to see the show and they say, ‘No, it’s not one of those,'” he said. “Marketing has been tough, but we’ve really blazed our own trail. We are careful about how we mix these genres. It really is for everyone.