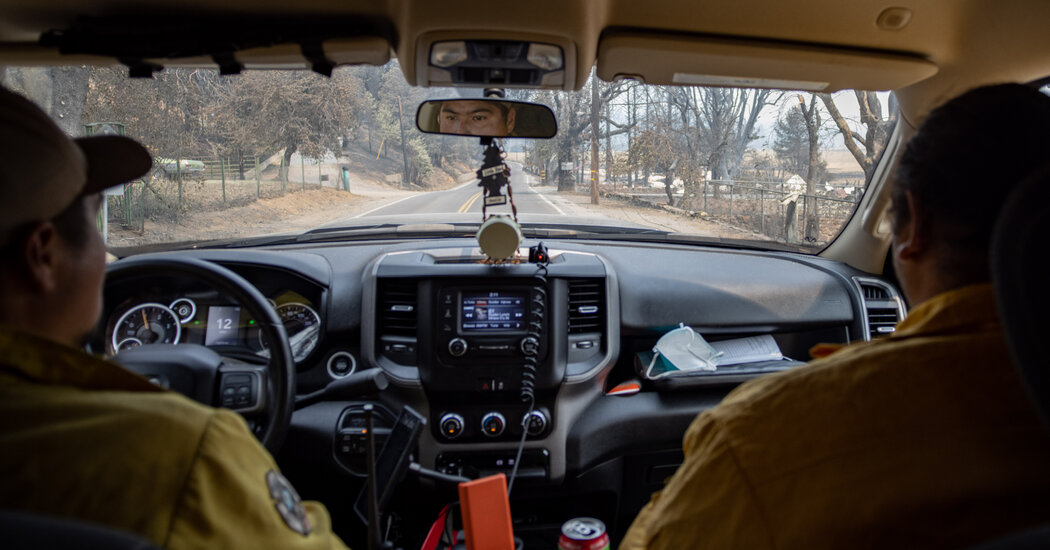 GREENVILLE, Calif .– For 20 years, Danny Manning has worked to protect his community as a firefighter, becoming too familiar with the scenes of destruction. But last weekend he was forced to face a different kind of loss as he walked among the rubble of his destroyed fire station in Greenville.

“This was our crew platform, this is our brand new engine,” said Mr. Manning, 41, a member of the local Maidu Native American community and his assistant fire chief. When the Dixie Fire passed through the small mountain town 160 miles north of Sacramento on Wednesday, he and his fire crew were on a mandatory day off after a grueling two-week shift fighting the historic blaze.

Then two of the crew’s engines, the station, and the office burned down.

On Sunday, Mr Manning, who heads a 12-person fire crew, most of them Maidu, returned to Greenville to assess the damage. “I can’t believe it,” he added, glass and debris cracking under his boots. “It hurts.”

About a decade ago, Mr. Manning had helped establish the firefighting team with little more than an old truck and determination. Fighting fires is one of the few options for stable employment in the sparsely populated Gold Rush region. Mr Manning said it was also part of a larger effort to protect and conserve the remote mountainous region – much of it sacred to the Maidu.

As of Tuesday, the Dixie Fire ravaged 490,205 acres in the vast Sierra Nevada, where the Maidu have lived for thousands of years.

“This is our land,” said Trina Cunningham, executive director of the Maidu Summit Consortium, a nonprofit group that works to reclaim and conserve ancestral native lands in northern California. Ms Cunningham also worked with the fire departments to map and prevent damage to the Dixie Fire burial, prayer and cultural gathering sites and the machines used to fight it.

“Our hearts broke when he burned Tásmam Koyóm,” said Ms Cunningham, referring to when the fire ravaged a sacred site, also known as the Humbug Valley, near Lake Almanor, about 20 miles northwest of Greenville.

By 2019, she added, the consortium finally reclaimed this land from utility company Pacific Gas & Electric. PG&E is under surveillance for any role its equipment may have played in igniting the Dixie Fire.

However, the fire did not only damage sacred sites, but also the homes and businesses of several members of the community.

“It’s heartbreaking,” said Mike Savala, another member of the Maidu fire team, as he walked through the town wreckage with Mr. Manning, the deputy fire chief. His own house remained standing in a street where several other houses could be seen collapsed in piles of metal, bricks and ashes.

Some community members refused to evacuate, remaining in the dense forest as the fire rolled down the mountainside, bringing with it plumes of thick and dangerous smoke.

“I’m ready,” said Reggie Merino, a Maidu elder who lives on a large estate in Goat Canyon, about 10 miles east of Greenville.

Mr Manning and Mr Sevala – who, in the absence of their fire engine, instead deliver food, water and supplies – had come to visit Mr Merino and try to convince him to evacuate . Mr. Merino refused.

On their next stop, Elder and basket maker Shiwaya Peck said that although she was terrified for herself and for her sister, who lives with her and suffers from seizures, she couldn’t imagine leaving her ancestral land behind. she.

“I was a nervous wreck just thinking about what was going to happen,” said Ms Peck, standing in the haze among her grandfather’s towering firs and cedars.