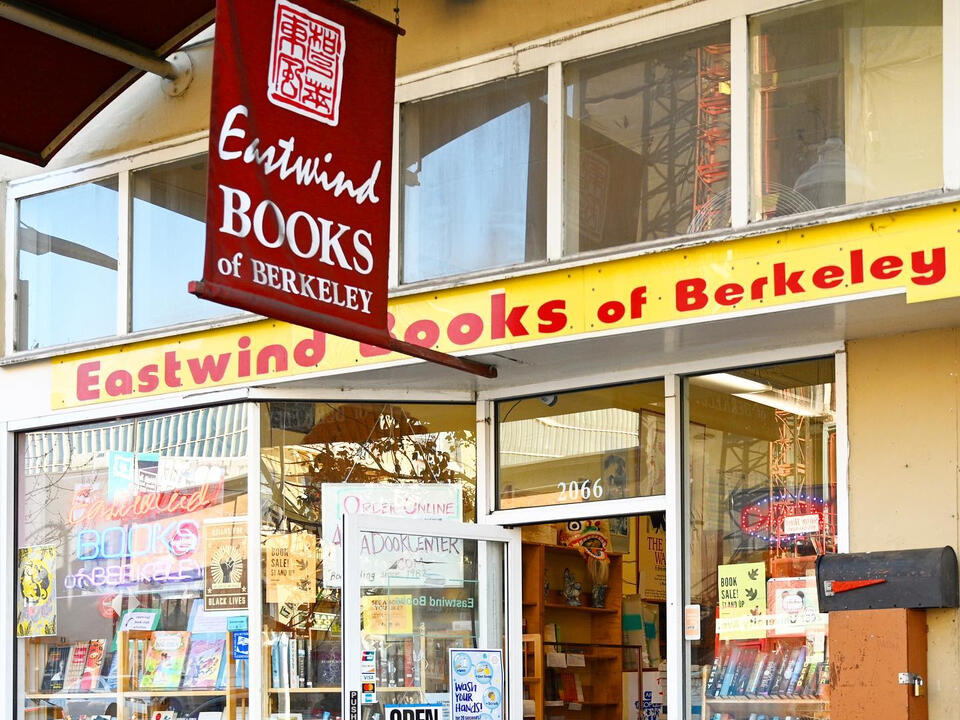 Eastwind Books of Berkeley is Beatrice and Harvey Dong’s labor of love for the Asian American and ethnic literary community. Founded in 1982, Eastwind Books is an independent bookstore that initially focused on Chinese-language books. When it closed in 1996, Harvey and Beatrice bought the store, turning it into one of the leading bookstores in the United States to focus on Asian American and Ethnic Studies.

Eastwind offers a wide variety of Asian American and ethnic literature. Do you want to learn Chinese brush painting? They have a book for that. Want a Japanese Vegan recipe book? They have one. Want children’s books or graphic novels that reflect the Asian American experience and culture? They have that.

They have novels and non-fiction titles centered on ethnic characters and historical figures. They are also a textbook provider for the Ethnic Studies and English Literature programs at San Francisco State, UC Berkeley, and Peralta College.

The Dong’s mission dates back to 1969 when Harvey participated in the Third World Liberation Front (TWLF) strike and Beatrice was a student at Oakland High involved in the Asian bloc in coalition with the Union of Black Students. The TWLF was a coalition of Black, Chicano, Latino, Native American, and Asian American students calling for ethnic studies programs in the state of San Francisco and at UC Berkeley.

The TWLF initiated and supported one of the longest student strikes in US history, which notably resulted in the establishment of the Ethnic Studies Department at UC Berkeley. Today, Dr. Harvey Dong is a lecturer in the Asian American and Asian Diaspora Division of the Department of Ethnic Studies.

To stay afloat in the age of the internet when online competitors are undermining physical stores, Eastwind Books registered a non-profit arm, Eastwind Books Multicultural Services (EBMS), in 2018 dedicated to promoting and l Accessibility of Asian American and Ethnic Multicultural Literature. Dozens of volunteers work alongside paid staff to carry out the EWMS work.

EBMS organizes author readings and collaborates with the Asian Cultural Center of Oakland to organize book panels. Many of their initiatives focus on developing interest in a range of social, political and cultural issues. For example, a recent symposium focused on contemporary Asian American activism, while an upcoming event on May 17 will focus on mental health recovery as Asian Americans.

Eastwind has a dedicated fanbase, with one Yelp reviewer referring to the store as a “community beacon” and another calling it its “go-to place for books by BIPOC (black, indigenous, and people of color).”

Dr. Dong has a favorite story about the interconnectedness of his work. His student, Kenneth Tan, took his Asian American history course as a freshman at UC Berkeley and wrote an oral history report on his Filipino immigrant lola (grandmother) Crescenciana Tan for her final article. A decade later, he volunteered to care for her during her decline. To help her remember more stories, he encouraged her to create art about her life. After his death, Tan published Crescensiana: A Memoir of Words and Illustrations. The book is now on sale at Eastwind Books.

How to get there and upcoming events

Eastwind Books is located at 2066 University Avenue, Berkeley, just steps from Shattuck Avenue and approximately 2.5 blocks from the Downtown Berkeley BART station. The Center Street parking garage is just over a block away. Check the website for upcoming readings and book signings and Asian American cultural events. Asha Tea House is two stores away for refreshments before or after shopping.