The Filipino-American Community of Vermont will hold its first public festival and fundraiser on Saturday, June 11 from 11 a.m. to 6 p.m. at the Barns at Lang Farm in Essex Junction. The event will feature live entertainment, a Miss and Mr. Fil-Am pageant for children, a raffle, crafts, games and a lineup of Filipino food vendors. Admission is $5 at the door and free for children 5 and under.

Cathy Bender of South Burlington has lived in Vermont for 16 years and serves as treasurer for the nonprofit group. She said there are about 200 member households scattered across the state who meet periodically to share their cultural traditions and help each other access consular and other services.

“It’s nice to reach out and connect with my fellow Filipinos,” Bender said.

Bender, who works in catering at the University of Vermont, will also be one of the food vendors at the festival. She started baking cakes and other traditional Filipino delicacies at home during the pandemic. Her business, Cathy’s Homebaking, took off, Bender said. 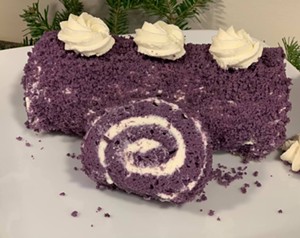 Among its most popular offerings is a purple yam flavored sponge cake roll known as ube and filled with a mixture of whipped cream and cream cheese, as well as an enriched egg yolk cake called yema.

For Saturday’s event, Bender will also be making barbecue chicken and pork skewers glazed with a sweet and tangy homemade sauce made with ketchup, honey, lime and soy sauce. Before moving to the United States in 2006 at the age of 23, Bender grew up eating street food in the Philippines. “A stick or two was enough to satisfy your craving,” she said.

Bender will also bibingka, a baked sweet rice cake made with glutinous rice flour, coconut milk, sugar, eggs, and coconut. These cakes are often topped with a mild, salty cheese “to balance out the sweetness,” she said. In Vermont, Bender uses cheddar. 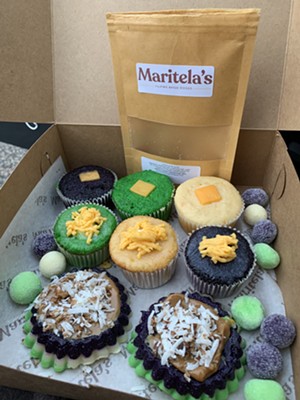 Antonio, 26, moved to Vermont six years ago from the Philippines. Having her own food business “was a lifelong dream of mine,” she said. She named it after her two grandmothers, Marilou and Otela. “In Filipino culture, we are very close to our ancestors,” Antonio said. “I feel like it’s empowering to find that name and honor them.”

A third food vendor, Mercy Mallette of South Hero, has lived in Vermont since 1988. The initial adjustment was difficult. “Everything is so different in our culture,” said Mallette, 55, quickly adding, “but not in a bad way. Just different.”

Mallette explained that, like Filipino cuisine, its origins include Chinese, Japanese and Spanish heritage. Before the pandemic, his Mercy’s Asian Island Cuisine was a regular stall at the Grand Isle Farmer’s Market. Many people are more familiar with Chinese food than Filipino dishes, so she offers lo mein stir-fries and spring rolls, although the latter are called lumpie in the Philippines.


For the June 11 festival, Mallette will also be serving Singaporean-style noodles called panicked, usually made with very thin rice or cornstarch noodles. “They’re famous in the Philippines,” she said. “All Filipinos like to eat pansit.”