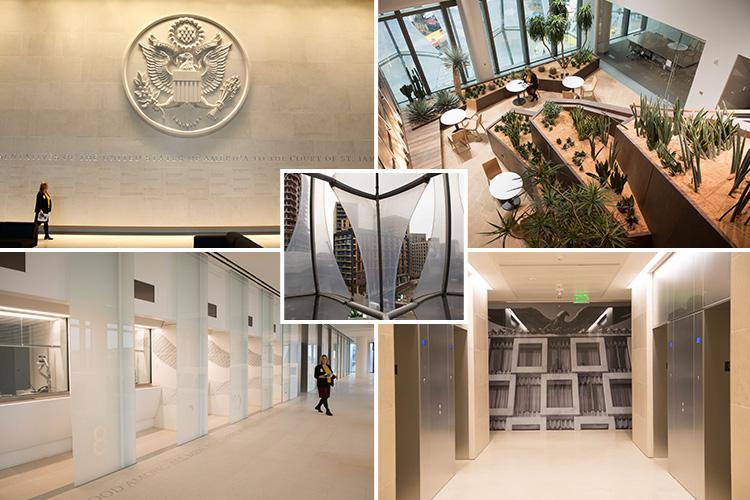 Inside the new £ 750million US Embassy in London

THE new £ 750million US Embassy building in London has been unveiled – ahead of Donald Trump’s visit to the UK next year.

Considered the most expensive embassy building in the world, US Ambassador Woody Johnson said today that means the “special relationship” between the two countries is stronger than ever.

The 12-story building on the bank of the Thames is protected by a moat and has been paid for by the sale of other US government buildings in the capital.

Johnson said British staff “look forward to welcoming the president when he comes here,” adding that it is not clear when he will come.

But the president is expected to travel to the UK in February for a working visit – coinciding with when the new embassy officially opens for the first time.

The ambassador added: “President Trump wants to work more closely than ever with the United Kingdom, and this will make our two countries more prosperous and more secure.

“The new embassy is therefore a signal to the world that this special relationship that we have is stronger and will develop and improve.

“He told me about it himself … He said ‘I want you to make him stronger’, and I intend to do so if I can.

“We look forward to welcoming the President when he comes here.

It took four years to construct the remarkable building, after the US State Department launched a competition to design the new embassy in 2008.

With six gardens, inside and out, each is inspired by a different part of America.

The glass on the exterior of the building is believed to signify “core democratic values ​​of openness, transparency and equality,” according to a State Department backgrounder.

The official opening of the Embassy will take place on January 16.

Earlier this month, Trump’s state visit was compromised after Theresa May said he was wrong to retweet far-right group Britain First.

It is believed he will always come to visit, but it will be a working trip, rather than a full state visit where he is said to have met the Queen.

We pay for your stories! Do you have a story for The Sun Online press team? Email us at [email protected] or call 0207 782 4368. We also pay for videos. Click here to upload yours.

How the United States declassified 30,000 pages of U.S. Embassy files in Indonesia