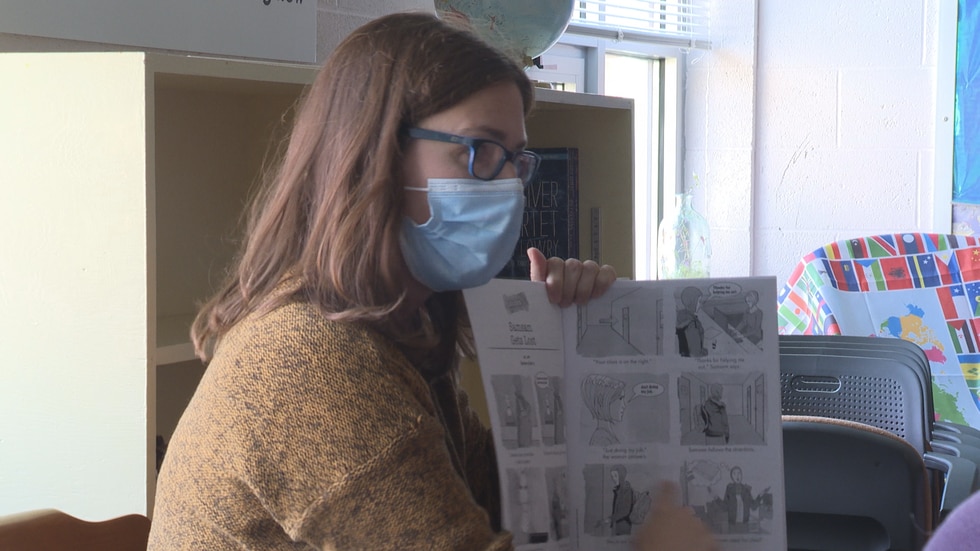 WAUSAU, Wisconsin (WSAW) – Dozens of people in Wausau are working to build the infrastructure needed to help people who have fled their home countries in search of safety in central Wisconsin. It is a vast network of resources; a major component supporting the effort is the Marathon County Literacy Council, or McLit.

McLit’s executive director Connie Heidemann said she first learned that central Wisconsin was in contention for a refugee resettlement agency office in January. She noted that she was delighted when the Ethiopian Community Development Council selected Wausau, an area outside the 50 mile radius that would allow other resettlement agencies to place refugees. ECDC representatives said one of the main reasons was that they saw Wausau as a welcoming community.

After the announcement this summer and federal confirmation this fall, the first group of refugees was tentatively scheduled to arrive around April 2022; then the United States withdrew from the war in Afghanistan. Timelines were changing daily to determine when and how many refugees would arrive in central Wisconsin, but the ECDC urged the U.S. State Department to give the Wausau area some time to identify and put in place a director and a office and allow local infrastructure to get ready to support refugees. This week, the new director of ECDC started work on setting up the Wausau office. The numbers keep changing, but the latest estimates indicate that Wausau is expected to welcome around 10 refugees before the end of the year, likely from Afghanistan.

“It will take the village for this to work,” Heidemann said.

Heidemann worked with state and national literacy councils to obtain educational materials for refugees and received advice on how to set up learning environments. The First United Methodist Church in Wausau donated rooms in its building to McLit to hold refugee classes to allow McLit to have a space separate from his other clients in his main office. The reason was to allow it to be a space where refugees can feel safe and comfortable to learn.

The Cultural Literacy Center, as it is called, has two classrooms, an education area for children and a waiting area for refugees. Heidemann originally planned that the classrooms would be reserved for both beginner and advanced English language learners, but said that since they are likely to host Afghan refugees, the rooms will be reserved for both men and women. for cultural sensitivity.

Classrooms started out as empty rooms with a blackboard on a wall. As the donations arrive, Heidemann has added chairs, table, shelves and decorations. She said they still need a lot of donations from the community to make them functional classrooms that can accommodate multiple students. They also rely on volunteers to help train incoming refugees.

Education will go beyond learning the alphabet, numbers, reading, speaking and writing. With the United States being one of three countries in the world that uses the Imperial measurement system as a national standard, and one of seven countries that uses the Fahrenheit scale, these methods will also be taught. It will also include showing people how to operate American appliances, which are often made differently in other countries, and taking people to visit grocery stores, the post office and other basic places to get their bearings. make sure they can do the basic things they need to make work in American society.

“If you get hurt or have to call the police, or if your house is on fire, how do you do that,” noted Mary Testin, the senior volunteer tutor, among a few things they will address.

She and Heidemann also said that cultural experiences, as well as the trauma that individuals come from, will be central to how they teach lessons. They noted that it can be very stressful to learn a new language when their lives depend on it, not to mention all the new cultural lessons.

“I have to make sure it’s a safe place, they can make mistakes and no one is going to jump on them and say why don’t you know,” Testin said.

A group of volunteers met this week to take stock of what is expected of them and to brainstorm ideas on how to teach English language learners, especially when the teacher does not know the main language of the pupil.

“Where does she find a job? Kelly Dallmann, a volunteer, gave an example. “Get a job, you have the word on the board, ‘get’, then they look for the word and together they learn. “

All of the volunteers present at the meeting had either some teaching experience or some immigration experience, but Heidemann said that was not necessary to become a tutor. She said they were working on really basic skills, so if people know the basic alphabet and number system taught in American schools, they can give private lessons. Testin also said that even people who do not wish to become guardians can help refugees with their language by introducing themselves to them, speaking with them and welcoming them.

For those who want to become a tutor or help in other ways to support refugees, Click here.