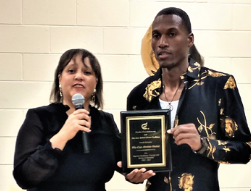 It was in early January that the former known as Robert Henry “Wize” Green learned he would be released from prison after serving more than 20 years behind bars.

A public campaign by the Exodus Foundation and others called for his release through a pardon, which was granted by former Governor Ralph S. Northam.

And Mr Green, who has changed his name to Wize Shahid, was alerted just the day before he was released from Deep Meadow Correctional Center in County Goochland that he would be returning home. It was, for Mr Shahid, an unexpected but welcome turn that left him “very delighted”.

Last Friday, Mr. Shahid marked the occasion with his family, friends and supporters at a small celebration at First Baptist Church Centralia, where they took stock of the work to free him and the path to track for him and others.

“I would like to thank everyone who provided the support on my behalf,” Mr. Shahid said. “The support you have provided on my behalf is support for a multitude of others.”

The 24-year-old Shahid was sentenced to 39 years in prison after being found guilty in 2002 of eight offenses stemming from his arrest during a traffic stop. The charges included distributing narcotics, possession with intent to distribute, possession of a firearm after being convicted of a felony and maliciously injuring an officer who scraped his knee during of the arrest.

During his decades of imprisonment in different institutions, Mr. Shahid endeavored to improve the lives of his fellow inmates. He participated in and helped create programs such as rehabilitation training sessions and helped other inmates. He eventually became a paid coach and mentor, gaining followers inside and outside prison walls and leaving an impact on people on both sides.

“I think they are touched by my perseverance,” Mr Shahid said, noting that he was working to bring about positive change for people in prison. He said he also kept a positive attitude despite the circumstances.

His efforts to be released from prison, which began during the tenure of former Governor Terry McAuliffe, who left office in January 2018, were eventually taken up by the Exodus Foundation, founded by pastor Dr. Madeline G. McClenney. Baptist and abolitionist prisoner in 1999 to address the situation of African Americans in the American criminal justice system.

In 2021, Dr. McClenney partnered with the Baptist Ministers’ Conference of Richmond & Vicinity and the Community Wealth Building Office of Richmond to form the “Save Robert Henry Green Coalition”. More than 40 state and local community and religious groups pleaded for Mr. Shahid’s pardon by reaching out to the government of the day. Northam and audience.

Since his release, Mr Shahid, a Halifax native, has settled into his new life in Richmond as he reconnects with family and friends. Although it took him some time to adapt to the technological changes of the past two decades, Mr. Shahid was largely helped by the relationships he established and nurtured while incarcerated. He also received financial, moral and mental support from the Exodus Foundation.

“I always had contact with the outside all the time,” Mr. Shahid said. “I was constantly interacting with people through phone visits, and so this adjustment wasn’t difficult.”

Mr. Shahid’s release was the first mission undertaken by the foundation’s Century of Mass Clemency Movement, which began in January 2021 as the start of a coordinated effort to see people like Mr. Shahid released from prisons in across America. With this success, the organizers hope their work can serve as an example for similar efforts at local and national levels.

Mr. Shahid has already written a memoir about his experiences and plans to pursue a bachelor’s degree in consumer behavior psychology through online courses at Colorado Technical University.

His work in Virginia prisons isn’t done, he said, because he implemented a number of initiatives and before his release. This includes a commercial enterprise, Mecca Beez American Inc., which consults with inmates, prison administrations, and politicians about the Virginia prison system, and seeks to serve both the ordinary citizen and policy makers.

Mr. Shahid has also participated in youth-oriented community events, using his experiences to “prevent them from following the same path”, he said. He also plans to speak in schools about his experiences.

Mr Shahid has also continued his mentorship of inmates, returning to Deep Meadow Correctional Center last month to speak with inmates about the reintegration programme. For Mr. Shahid, these initiatives are the essence of his efforts to move forward. He wants to share his story and improve the lives of others.

“That’s what it’s all about to me,” Mr. Shahid said, “connecting people with people for the advancement of humanity. That’s the mission.