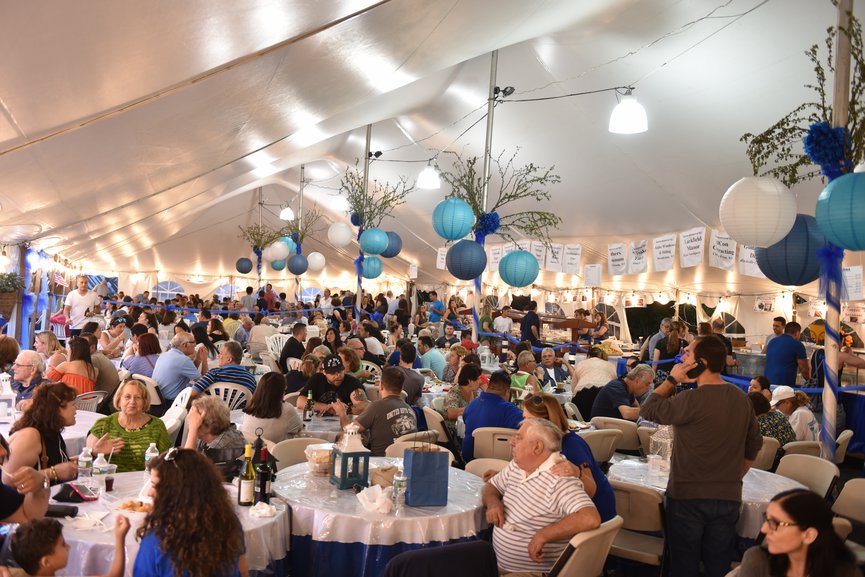 APTOS, CA – The Prophet Elias Greek Orthodox Church in Santa Cruz, Calif., Hosts the seventh annual blessing of the waters on Saturday, January 8, from 11:00 a.m. to 12:00 p.m. at Rio Del Mar State Beach in Aptos, California, with His Eminence Metropolitan Gerasimos of San Francisco presiding. All parishes in the Bay Area and the Central Coast are invited and encouraged to attend. Those interested in diving or swimming for the cross, please contact the church office by email: [email protected] or by phone: 831-429-6500.

PATERSON, NJ – The Girls of Penelope (DOP) Chryssida Chapter 438 of Union County and Greek Girls Kitchen present an in-person and virtual Vasilopita event on Sunday January 9 from 2:00 p.m. to 5:00 p.m., at Kontos Foods, 100 6th Avenue in Paterson, New Jersey. Join celebrity chefs (and DOP sisters) Sophia Manatakis and Melina Milionis back in their favorite kitchen at Kontos Foods. Seating is limited to 60 for the in-person event. Price: $ 60 in person at Kontos Foods, $ 30 virtual. The event includes baskets and door prizes. For those who cannot make it to the event, please consider trying your luck for the grand prizes. New prices added daily. Link provided by email one day and one hour before the event. Registration required for both options. More information is available by email: [email protected] Partial proceeds from fundraisers benefit Penelope’s Daughter National Projects, Penelope Chryssida Daughters Chapter 438 of the Union County Scholarship Fund and other causes.

ONLINE – EMBCA presents the 100th anniversary of the Godfather of Rhythm and Blues: Johnny Otis / Ioannis A. Veliotes Roundtable on Sunday, January 9, 2 p.m. EST / 9 p.m. in Athens EEST. The commemoration of the anniversary will celebrate the life, times and works of an iconic and astonishing figure of the musical world, inducted into the Rock and Roll Hall of Fame in 1994, the Renaissance man of rhythm and blues – Johnny Otis on the 100th anniversary of his birth on December 28, 1921 and the 10th anniversary of his death on January 17, 2012. The panel will be moderated by Lou Katsos, President of EMBCA and President of the Hellenic National Cultural Commission of AHEPA . The distinguished panel – in training – will include author, historian and activist Herb Boyd, professor in the Black Studies Program at the City College of New York (CUNY); author / poet Nicholas Alexiou, professor of sociology and director of the Hellenic American Project at Queens College; and filmmaker Tassos Rigopoulos, Assistant Professor in the Department of Media Arts and Technologies at Borough of Manhattan Community College (CUNY). More information is available online: https://embca.com.

ONLINE – The Hellenic American Women’s Council (HAWC) presents an online interview via Zoom on Wednesday, January 12, 7:00 p.m. Central, with Her Voice author Varvara Athanasiou-Ioannou and Professor Mary Kalantzis, one of the participants to the book, which introduces immigrant women and their stories in Greek. Register online: https://bit.ly/3sF2AAi.

LONG ISLAND CITY, NY – Greece’s most popular carnival event arrives in New York City with the 4th Annual Patras Carnival Party (Patrino Karnavali) on Saturday January 15 at 10 p.m. at the Melrose Penthouse, 3608 33rd Street in Long Island City. During the carnival period, there are events such as carnival balls, masked balls and parties at home, neighborhoods, clubs, cafes and restaurants. One of the most popular events is the ’80s Back to Carnival’ night, attracting over 1,000 attendees. Three of its DJs, Stelios Apostolopoulos, Panagiotis Kolliopoulos and George Kouverianos, come to New York and invite you to dance until the next morning. Official Sponsor: LOUX – www.loux.gr. Tickets available on Eventbrite, search: 4th Annual Patras Carnival Party.