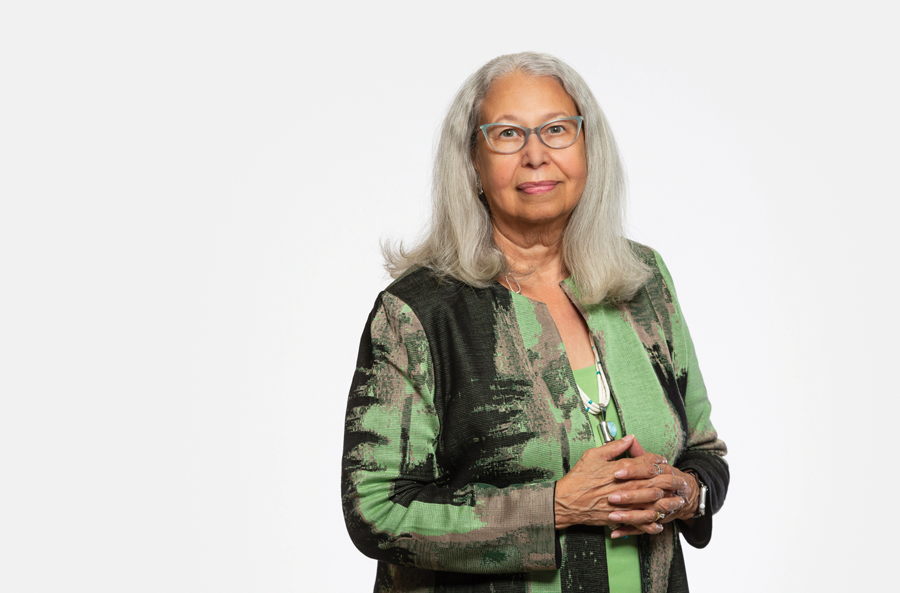 When the Virginia Museum of Fine Arts named its new chair of the board, Lynette Lewis Allston became the first Native American woman elected to the position in the museum’s 86-year history. The current Chief and Chairman Emeritus of the Tribal Council of the Nottoway Indian Tribe of Virginia will also serve as the first Native American Chairman of the Board of Trustees of a Top 10 American Art Museum.

Ms Allston has served on the VMFA board since 2017, but her relationship with the museum began before then. Over a decade ago, she came across information about VMFA’s Studio School in a Richmond newspaper.

‘I had dabbled in pottery from time to time and occasionally took a refresher course or to develop a new technique,’ Ms Allston recently said by phone. “It felt convenient to go there even though it was a long drive, so I feel like part of what got me there was fate.”

Pottery classes are just one of many VMFA offerings. The museum opened in 1936, with a mission not only to collect, preserve and exhibit works of art, but also to encourage the study of the arts. The museum’s worldwide collection of nearly 50,000 works of art spans more than six millennia.

“The VMFA has focused on raising awareness with music, events, festivals and children’s activities,” Ms Allston said. “All these different experiences make people more comfortable going to the museum frequently. This comfort leads them to see the museum as a place for everyone,” Ms. Allston said. While acknowledging all the museum is doing to reach new audiences, Ms. Allston added, “I would really like to see this outreach continue and grow.

She believes that extended education can help the museum reach and showcase rural and Native American populations. She is excited about an upcoming “VMFA On the Road” stop on September 17-18 which coincides with the Nottoway Indian Tribe of Virginia PowWow at the Surry Parks and Recreation Center. According to powwow organizers, the VMFA Mobile Arts Unit will be displaying artwork that includes Native American pieces. The 53-foot climate-controlled mobile unit trailer includes Wi-Fi to connect visitors to VMFA educators and interactive components to meet their 21st century expectations.

“It’s a rural area and they bring community service to a population that might not otherwise have seen it,” Ms Allston said of the mobile unit. “Bringing art to people is such a special approach.”

Ms. Allston feels uniquely positioned to offer her advice due to her Native American heritage, as well as her lifelong connection to the land. She grew up on a farm in Drewryville. Although she spent two decades in South Carolina after graduating from Duke University, she returned to the family farm with her husband of 50 years, Allard Allston.

“We met at a party and happened to hit it off straight away. When you meet the right person, that’s how it is,” Ms Allston said. The two were married 11 months later and had two sons together, Adam and Teague. Now she enjoys spending time at home relaxing whenever she can. She has a pottery studio that she likes to get away to – making functional pieces sandstone on the wheel.

“At some point, I may have to slow down my roll,” Ms Allston added. “But for now, we never get bored.”

Meet a tireless advocate for educational awareness and inclusion – Lynette Lewis Allston, Chair of the VMFA Board of Directors.

Volunteer position: Chairman of the Board of the Virginia Museum of Fine Arts.

Occupation: Chief of the Nottoway Indian Tribe of Virginia.

Date and place of birth: December 1949 in Franklin.

Where I live now: Drewryville.

The Virginia Museum of Fine Arts is: One of the largest comprehensive art museums in the United States. VMFA, which opened in 1936, is a state agency and private educational institution. Its purpose is to collect, preserve, exhibit and interpret art, and to encourage the study of the arts.

VMFA mission: By public mandate, the VMFA is charged with a mission of collecting artwork to educate citizens throughout the Commonwealth of Virginia.

When and why founded: VMFA began in 1919 with a donation of 50 paintings from Judge John Barton Payne. More donations followed, and in 1932 Judge Payne offered a $100,000 challenge grant to build a state-run museum for Virginia’s growing public art collection. Governor John Garland Pollard accepted the challenge, led a campaign to raise additional funds from private donors, and promoted the idea of ​​using state revenues for museum operating expenses. Four years later, the doors of the original museum building are open to the public.

When he is elected Chairman of the Board of Directors: June 2022.

Significance of being named the first Native American Chairman of the Board in VMFA’s 86-year history and one of the Top 10 Comprehensive Art Museums in the United States: It is amazing that there are still “firsts” to achieve. As the new president, VMFA shows that this is a place for everyone. No one is excluded.

Objective or project number one as Chairman of the Board: I want it known that VMFA is a place loved by all Virginians.

Strategy to achieve the objectives: The VMFA has extensive networking and supportive relationships with local museums and cultural groups across the Commonwealth.

My proudest reason for being part of the VMFA: To be asked to serve is an honor. I suspect I’m the “first” VMFA board chairman who has always called a south-central rural community (Drewryville in Southampton County) “home”. I grew up on a farm and was raised by a family of farmers.

How VMFA becomes more inviting for everyone: Through art, VMFA tells the stories of people and cultures that span millennia across the world. As this museum raises awareness and educates, it offers a vision of respect and understanding through inclusion and cultural diversity.

Native American artists and the VMFA: The Native American collection is a vast sweep that covers the Americas. Recently, other works by Virginia natives have been acquired. Hopefully as the gallery space expands more will be added in the future.

What does the VMFA expansion and renovation projects mean for the whole community: The Virginia Museum of Fine Arts has begun its more than $190 million expansion and renovation project which is tentatively scheduled to be completed in 2027. The project involves adding a nearly 170,000 square foot new wing and renovating 45,000 square feet of existing space, while maintaining four acres of green space in the sculpture garden.

COVID-19 and the VMFA: During Covid, the museum was closed for almost four months and offered virtual programming. With the reopening, the museum has followed health protocols while maintaining its commitment to education through expanded virtual engagement and the technology infrastructure that has supported live programming with teachers across the state, curatorial lectures, performances by musical artists and more.

Why the VMFA never shuts down: Always open means that VMFA is available and accessible to everyone.

Existing highlighted exhibits: Currently, “Tsherin Sherpa Spirits” is currently the featured exhibit at VMFA. Paintings and sculptures by the contemporary Tibetan American artist of Nepalese origin Tsherin Sherpa. The works to be seen deal with loss, struggle and reappropriation.

Events to come: Opening on October 8 is “Storied Strings: The Guitar in American Art”. The exhibition will explore the symbolism of the instrument in American art from the beginning of the 19th century to the present day.

How art inspires me: How art inspires me depends on my mood. Strolling through a gallery and stopping to contemplate a painting, a sculpture or a digital creation resonates with my feelings at this precise moment.

A quote that inspires me: In my early years, my Uncle Fitz Turner reminded me that “apologies don’t count.” These words were meant to challenge and motivate. The message stays with me today.

At the top of my to-do list is: Next year plant flowers like I did before the covid pandemic.