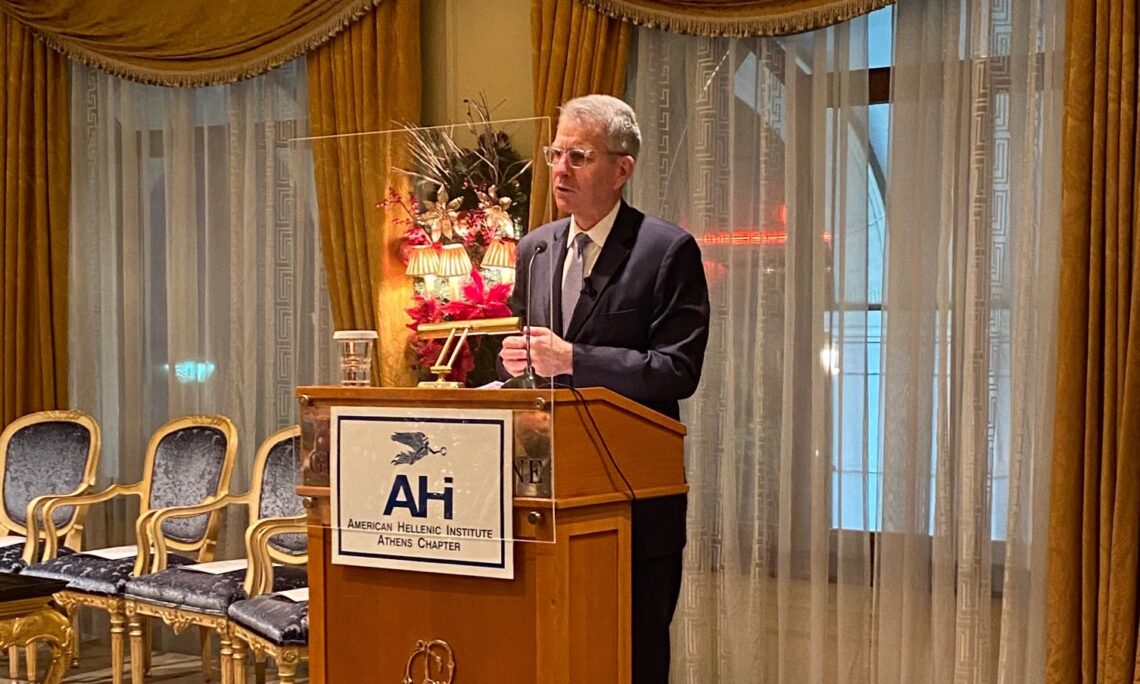 Remarks by Ambassador Pyatt to AHI: “The Role of the Greek-American Community in Advancing American-Greek Relations”

Ambassador Pyatt spoke at the event “The Role of the Greek-American Community in Advancing US-Greek Relations” held in Athens by the American Hellenic Institute.

Mr. Pyatt said; “I was in Washington, DC for the Strategic Dialogue in October and although I did not have the opportunity during this brief visit to catch up with AHI and other groups in the Greek Diaspora as I usually do when I’m in town, I want to let you know that the work you are doing was very exposed. AHI and the various groups of the Greek diaspora active in Washington remain incredible force multipliers in bilateral relations. There is no doubt that the role you have played and continue to play in strengthening the important strategic relationship between Greece and the United States.

In addition, he stressed that “it is remarkable to look back on the road traveled by US-Greek relations over the past five years. Greece has become an engine of stability and a source of solutions widely admired in the region. The defense and security relationship between Greece and the United States has grown considerably over the past five years, and I am proud to say that we are at a peak of our military cooperation. This was evident when Secretary of State Blinken and Foreign Minister Dendias signed amendments to our Mutual Defense and Cooperation Agreement in October to extend the duration and scope of the MDCA to advance our common security goals. . And we will shed more light on it on Friday when I will go to Alexandroupouli with Defense Minister Panagiotopoulos to observe our greatest military cooperation ever in this strategically located city ”.

“Greece has proven to be a valuable partner of the United States, a pillar of regional stability and an important energy and transport hub able to build bridges between NATO Allies and key partners regional. As an important complement to the administration’s efforts, we are seeing sustained interest from members of Congress, having welcomed in recent months Senators Menendez, Murphy and Ossoff, as well as Congressman Bilirakis. And I was delighted to see strong bipartisan support for the Menendez-Rubio law on the defense of the United States and Greece and on the interparliamentary partnership, and the Bilirakis-Deutch legislation in the House. President Biden of course cares deeply about the democratic values ​​that arose here in ancient Athens and he has made it clear that he is personally committed to taking US-Greek relations to the next level.

In short, we have reached a time when Greek and American interests in this region are more closely aligned than ever, and the American-Greek relationship is at an all time high. Many governments and two political parties in our two countries have contributed to this achievement, but I will also pay tribute to the many individuals and organizations who have made our bilateral relations a priority, including, importantly, the Greek-American community. . It is therefore a particular pleasure to be with you and to have the opportunity to speak about what I believe is an important driver of the American-Greek relationship: our close bonds between peoples and the vital role that Greek America the diaspora plays in the advancement of our common objectives ”.

Finally, the American Ambassador declared that “the Greek diaspora plays an important role, putting into practice our democratic principles and forming a bridge between the peoples of our two countries. I often say that you are one of the “secret ingredients” of our bilateral relationship. We have celebrated Greece’s bicentenary over the past year, working to strengthen our ties through programs that support Greek civil society, cultural and educational institutions. The Greek Diaspora has built on AHEPA’s long tradition of leadership on issues related to the revolution and has made a significant commitment this year to raising awareness of the role of the American Philhellenes in the struggle for Greek independence. and to pass on 200 years of support and backing from the United States. for and friendship with Greece. Members of the Diaspora have helped us not only to celebrate our countries’ historic relationship, but through your commitment and advocacy, you demonstrate America’s respect for the ancient Athenian ideals that inspired our founders and continue to us. inspire today. Greece and the United States are united by principles that bind and empower our people. And I want to thank you all for your efforts over the years to support the Greeks and the United States Embassy’s mission to strengthen these vital bonds and bring us closer together. And I urge you to think and work even harder in the months and years to come – we are not done yet!