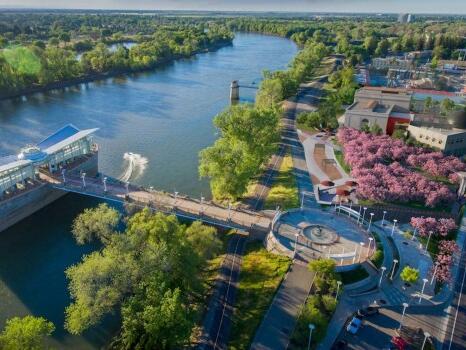 “We are a city of rivers and a city of trees, and the Hanami Line weaves together both aspects of our civic character. It will salute Sacramento’s rich history and create a lasting connection with the cherry trees that bloom each year in our nation’s capital. —Congresswoman Doris Matsui, Honorary Co-Chair of the Hanami Line Fundraising Campaign Committee

Sacramento, CA is undergoing a beautification with the new Hanami Line at Robert T. Matsui Park is slated to open in 2023, according to Stephanie Robinson, communications and marketing manager for the Sacramento Tree Foundation. The 1.5-acre Hanami Line is located just upriver from Old Sacramento’s historic waterfront and within walking distance of the Railyards and Museum of Science and Curiosity.

Hanami Line Park will perfectly complement Sacramento’s nickname as the City of Trees, which dates back to the Gold Rush era when newcomers planted shade trees to escape the scorching summers. The trees thrived in the rich soil at the confluence of the American and Sacramento rivers.

The Sacramento Tree website described the park’s vision as matching the tradition of other countries around the world, where people gather each spring under cherry blossoms to celebrate nature’s transience and beauty. of life. In Japan, this tradition is called hanami and attracts thousands of families to picnic, play and relax in its parks. The Sacramento Hanami line is designed for this wonderful tradition as well as many year-round uses ranging from meditation and yoga to bustling food, art and music festivals.

What you expect to find in this unique park:

“This project will transform and beautify this section of our waterfront, creating a serene gathering space for residents year-round and a beautiful springtime destination that will attract visitors from around the world. The Hanami Line will be a great place to host lively food, art and music festivals, as well as smaller gatherings and picnics,” Robinson said.

Along with the beauty of the hanami, or flower-viewing – hana means “flower” and mi means “to look at” that this park will offer, Robinson emphasized that “the Hanami line will honor the area’s Japanese-American community who have helped shaping Sacramento since the 1880s. Japanese immigrants and their descendants helped build the region as we know and love it today – our farm-to-fork heritage, hundreds of thriving family businesses, l civic engagement and service to country, a host of recreational and athletic clubs, and public art and cultural festivals. The Hanami Line will provide a permanent destination to celebrate Japanese culture and the many contributions of Japanese Americans to this region.

“In Sacramento, the City of Trees, it’s only fitting that we have our own cherry blossom park to appreciate the beauty of the faded flowers that remind us of how precious and fleeting life is,” Robinson said.

To donate, go to sactree.org/hanami/donate.