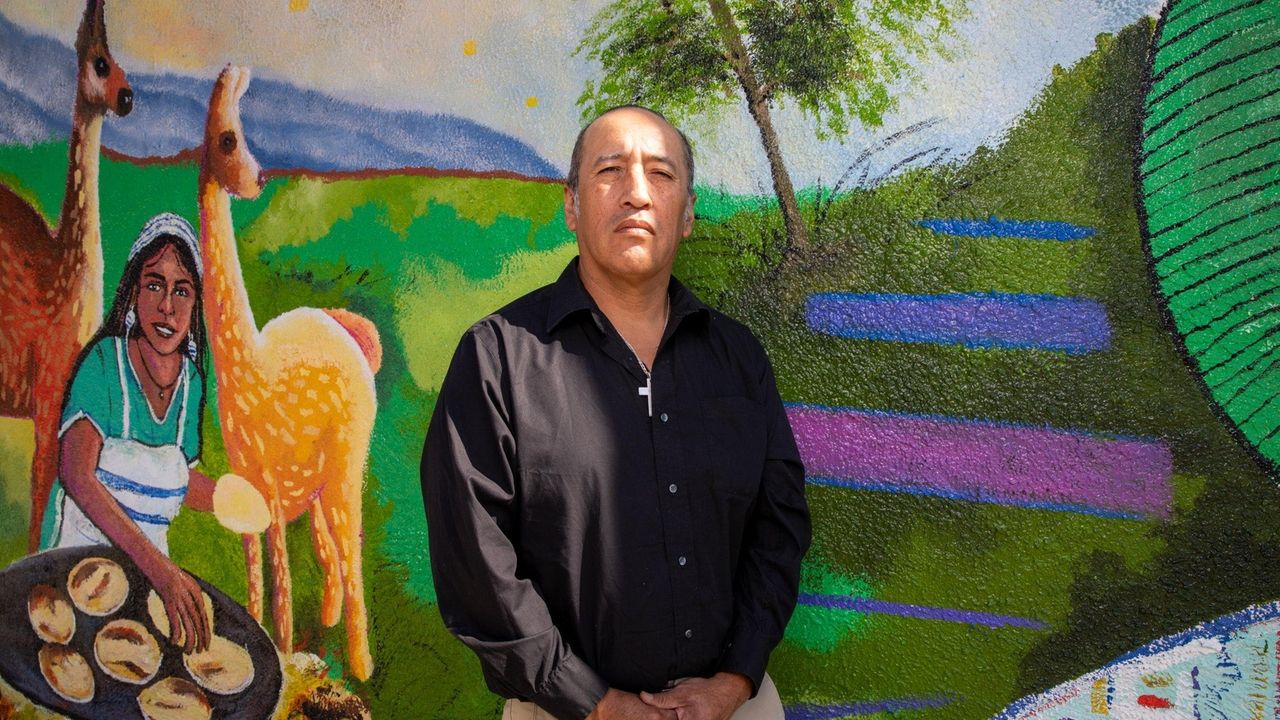 A colorful 60-foot mural is Brentwood’s latest public artwork that captures the vibrancy and importance of Latin American culture, right down to the much-loved pupusa, El Salvador’s national dish.

The visionary behind the mural is artist Segundo Orellana, 54, from Patchogue. The Ecuador native is a self-taught artist who has visited museums, libraries and galleries to guide his art. Since the recession of 2008, he has used his skills to promote the beauty of Latin America through nearly a dozen murals adorning businesses and buildings in Patchogue, Central Islip and Brentwood.

“Making murals is so important because we live in such a diverse community,” Orellana told Newsday days before the unveiling. “To create murals is to respect the community and to be proud of our heritage, our hobbies, our family, our customs, our music and so much more.”

Orellana, a full-time performer, joined Teatro Yerbabruja in Bay Shore five years ago. The arts center, named after a plant that thrives in harsh conditions, focuses on Long Island’s traditionally underserved and underrepresented communities and artists, with a focus on Central Islip, Brentwood and North Bayshore.

“Make public art projects, like murals, that reflect Latin American culture [reminds] who we are, where we come from, our roots, our colors, our music,” said Margarita Espada, a Puerto Rican artist who founded the Teatro in 2004. “It is also an opportunity to educate and create spaces for conversations with all the inhabitants of so many cultures that coexist in Brentwood.

The mural took 150 hours for Orellana and his assistant, Daniel Jimenes, 23, of Central Islip. Jimenes, also a self-taught artist, prepared the building and drew grids while Orellana sketched its outline. Then they got to work. Rather than using a projector to project the design onto the wall, Orellana carefully sketched the outline by hand before painting it by hand. The pharmacy is the site of a previous mural by Orellana, which was removed for his later work.

Jimenes, who is Dominican, is Orellana’s apprentice. Although Jimenes said his personal art leans towards fine art on canvas, he said he enjoys the experience he gains under Orellana, who “takes him out of his comfort zone”.

The mural, which extends to the side of the pharmacy, is a mixture of rich hues ranging from deep reds to cerulean blue. Rather than focusing on a single theme, Orellana’s mural captures pieces of Latin America and depicts several countries in the region.

In the center of the mural is a Guatemalan woman representing the indigenous people of Central America. It overlooks a sandy beach and ocean waves, a nod to stunning Latin American beaches, Orellana said. Another woman is painted cooking pupusas, thick grilled cakes from El Salvador and Honduras.

“This [Brentwood] is a place where diversity is unique,” ​​Orellana said. “Everyone who walks past the mural is part of the community… We all have our culture deep within us, but seeing the mural is like a light shining on our culture.”

Where to see some of Segundo Orellana’s murals:

Brinley Hineman covers the town of Islip for Newsday. She was previously a reporter in Nashville, Tennessee, and is originally from West Virginia.