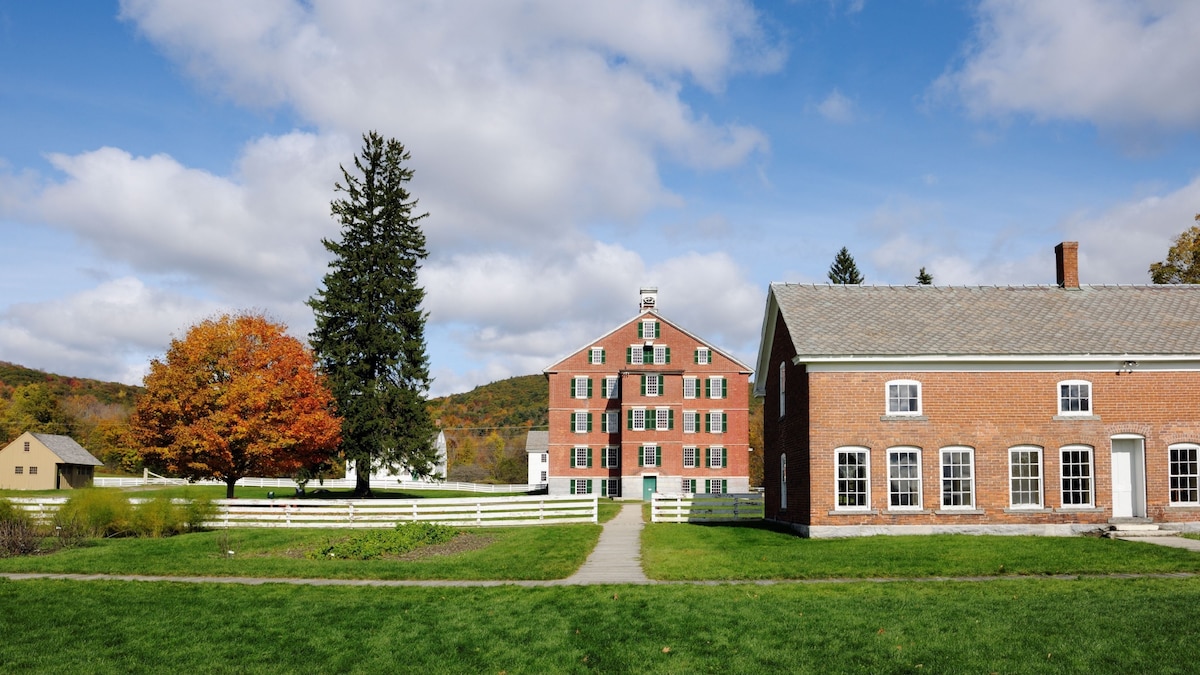 When the shakers Arriving in New York in 1774, their distinctive blend of English heritage, diligence, and devout Christian worship immediately branded the religious sect an outsider. Rumors and myths arose: the group was austere, bigoted and shunned technology, with an unsustainably celibate lifestyle. It’s no wonder that even at its peak in the 1800s, the group remained small, just 5,000 people in 19 communities.

Yet the Shakers had an outsized impact on American culture. Today, two former Shaker settlements in the forested reaches of western Massachusetts and eastern New York, along with an ambitious future museum, offer new ways to examine the group’s legacy, as well as dispel misconceptions. All of this demonstrates the tenacious spirit of ordinary people trying to live extraordinary lives.

From their far-reaching inventions (including textiles, furniture, and farm equipment) to precision-crafted architecture, the Shaker culture is as enduring as the stone foundations that dot the North American landscape. “Here comes this radical religious group,” says Jennifer Trainer Thompson, director of Hancock Shaker Village in Pittsfield, Massachusetts. “And yet they have this lasting influence.”

To explore the group’s innovations and inspirations, travelers can head to the bucolic farmlands and small towns of New England. Amidst pristine, yet stunning, historic barns and craft museums, it’s easy to see why Shaker’s ‘simple gifts’ have had such a big impact.

Division in the Church

The Shakers diverged from the mainstream quakerism near Manchester, England, in 1747. The group’s name comes from their ecstatic worship practices, including trembling, dancing, and speaking in tongues. Members of the cult emigrated to America in 1774 to escape persecution, eventually settling in the wilderness of what is now Albany, New York. Groups broke off, establishing communities as far south as Florida, north to Maine, and west to Indiana.

Mainly farmers, the Shakers were very enterprising. They invented the flat broom, the circular saw and the wheeled washing machine. They ran a successful seed distribution business. They are perhaps best known for an iconic furniture style with clean lines and cabinetmaking it is still popular today. Shakers used environmentally sustainable methods — ensuring clean water, harnessing water power, and practicing what is now called regenerative agriculture — hundreds of years before the term entered the mainstream lexicon.

Their conservative appearance—neck-to-ankle dresses for women and three-piece suits for men—belied a socially progressive agenda. The communities of “brothers” and “sisters” were divided into “families”, each headed by a man and a woman. All members had equal status, with black converts being treated the same as whites. Although biological families may join together, men and women lived separately under the group’s vow of celibacy.

(Why a stay in Amish country can help travelers disconnect.)

Many Shaker museums are currently highlighting the group’s focus on equality and sustainability, but Jerry Grant, director of research and collections for the Shaker Museum in Chatham, New York, thinks another theme makes the community relevant today. “It’s hard to put yourself aside for the good of all. We are certainly sorely lacking that right now,” he says.

In search of paradise in Mount Lebanon

On a sliver of valley winding through the Taconic Mountains in New Lebanon, New York, the group established mount lebanon, the first official Shaker community, seat of religious authority and holiest site. It flourished until the early 1900s.

The remaining Shakers left the village in 1947, but a “liveliness” persists. “We created an environment that was conducive to the spiritual, and that remains intact today,” said Brother Arnold Hadd, one of two remaining practitioners at sabbath lake in New Gloucester, Maine, the only functioning Shaker village in the country.

Most of Mount Lebanon, a National Historic Site, is occupied by the Darrow School. He incorporates many Shaker concepts into his curriculum, including focused hands-on labs. “Community is the most important theme here. It’s what kids talk about after they graduate,” says school principal Andy Vadnais.

The campus is spread over 365 acres of grassy fields with mountain views. Visitors can tour many of its 17 Shaker structures, dating from the late 1700s. The barrel-vaulted library, built in 1785, is one of New York State’s most significant examples of vernacular architecture. A former meeting house, there are three entrance doors, one at each end for the Shaker brothers and sisters and one in the center for “the world”.

Across a pond is a high-ceilinged barn-like structure for tanning leather, another Shaker-side bustle. The building’s stellar acoustics are showcased during the summer Tannery Pond Classical music concerts.

At the top of the road are the Sassafras Farm Ruins. When Carol Reichert and Jerome Shereda bought the 78-acre property in 2020, only the brothers’ workshop (for men) and the chair factory, both remnants of one of Mount Lebanon’s eight “families”, were recognizable.

After clearing away decades of tree limbs and debris, the couple unearthed the largely intact stone foundation of an 8,000 square foot barn; a long-buried cooler; the ruins of the Atelier des Soeurs; and a dam with a small waterfall.

A new network of trails leads through the woods and to Shaker Cemetery, where approximately 40 souls are buried as they lived: as a community. A single monument engraved with the word “Shakers” marks their final resting place.

Reichert and Shereda have invested nearly $2 million of their own capital in Sassafras Farm, which opens this summer as a museum, overnight accommodation and performance space. “We’d like people to come away with a broader view of the Shakers’ contributions to American life,” Reichert says. “It’s an incredible part of our history, by a group of spiritual people who have created monumental things.”

A Showcase for Shaker Life

A 15-minute drive from Chatham, New York, the Shaker Museum houses the world’s largest collection of the group’s furniture, medicinal preparations, and farm equipment. Founded in 1948 by John Stanton Williams, Sr., a Manhattan stockbroker turned gentleman-farmer, the museum has displayed thousands of artifacts in his barn. (When it opened, admission to the museum was 75 cents.)

Today, the museum has 18,000 objects, but has little exhibition space and can only be visited by appointment. That will change in 2024, when a new $18 million headquarters will transform and expand a Victorian-era hotel with exhibits on Shaker history and exhibits on the cult’s impact on art and culture. design.

Executive director Lacy Schutz is eager for visitors to see unusual artifacts, including a platform shoe created for a sister with a leg length difference and a 19th-century rocking chair converted into a wheelchair. “Among the core values ​​of the Shakers was the belief that everyone should be able to fully participate in their community, regardless of physical ability and age,” she says.

Seventeen miles across the border in the Berkshires of Massachusetts, on a vast plain of 750 acres, Hancock Shaker Village preserves 20 impressive historic buildings. Some are still in use today on the property’s working farm. The most recognizable is a majestic round stone barn with a maize yellow cupola, built on an embankment in 1826.

Last summer, a newly cleared path to the family site south of the village revealed, for the first time in 60 years, the foundations of six more buildings, including a sugar bush and an additional embankment barn.

In the still-standing buildings of the village, exhibits examine both Shaker’s historic life and how contemporary artists and designers draw inspiration from him. “[The Shakers] thought you didn’t just make a chair. You did your best,” says Thompson. “When you look at the perfectly turned wood, the beautiful proportions, the simplicity where there is nothing wasted, you have a visceral response. They embodied their religion in a physical object.

Beyond their profound influence on objects and architecture, the Shakers’ forward-thinking visions of inclusion, equality, sustainability, and community provide lessons for the modern world. “These are issues we’re still grappling with, and it’s hugely meaningful to look back at this small group of people who are striving to get it right,” Schutz says.