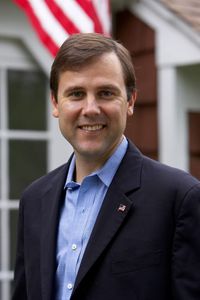 Special for the Hellenic News of America

If elected to Congress, I intend to play an active role in foreign affairs. One of my main areas of interest will be the Eastern Mediterranean, a critical geostrategic region at the intersection of North Africa, the Middle East and Europe. The United States must have a foreign policy toward the region that reflects both our values ​​and our interests. NATO ally Greece and strategic partner Cyprus are increasingly crucial to projecting US and Western interests in the region, especially as Turkey has distanced itself from the Western alliance under the reign of its authoritarian and Islamic fundamentalist leader, Recep Tayyip Erdogan.

To that end, I look forward to strengthening US-Greek, US-Cypriot relations and holding President Erdogan accountable, once in Congress. I will also be joining the Congressional Hellenic Caucus, which will allow me to work with like-minded people to achieve these goals. In addition, I will engage with Greek-American and Cypriot-American organizations, stakeholders and constituents to advance our common interests.

Greece and the United States enjoy strong relations in various sectors, including defense, trade, business, energy, tourism, and people-to-people relations. Greece is an increasingly important U.S. defense partner in the region, with the U.S. and Greece signing an enhanced Mutual Defense Cooperation Agreement (MDCA) in October 2021 that will allow forces Americans in Greece to train and operate from other locations in Greece. Greek naval bases, such as Souda Bay, as well as key ports, such as Alexandroupolis, are absolutely essential to US military operations and the projection of influence vis-à-vis the Balkans, South Africa North and the Black Sea. Greece is a pillar of stability defending the southeastern flank of Europe, which is more important than ever given Russia’s invasion of Ukraine. Greece’s efforts to help Ukraine, in coordination with the United States, further strengthen Greece’s role as an important and reliable ally of the United States.

As a member of Congress, I will promote US-Greek relations, including our critical defense relationship. I will strive to actively participate in the appropriations process to ensure that the U.S.-Greece defense relationship is properly supported, including through Foreign Military Sales (FMS), Foreign Military Financing (FMF ) and International Military Education and Training (IMET). To this end, I will support the full implementation of bipartisan legislation enacted in recent years, including the Eastern Mediterranean Security and Energy Partnership Act of 2019 and the US-Greek Defense and Partnership Act. interparliamentary.

This year will mark the 48th anniversary of the illegal Turkish invasion of Cyprus. Turkey has kept around 40,000 troops on the island since its invasion. The United States must refocus on the Cyprus problem, especially given President Erdogan’s broader hegemonic ambitions in North Africa, Southern Europe and the Middle East, which threaten both regional interests and states. -United. I will work with colleagues in Congress to pressure Turkey to end its occupation of Cyprus, so that we can have a whole, free and peaceful Cyprus. Cyprus deserves to be reunited in a just settlement.

I will also highlight the need for Cyprus to be seen through a multifaceted lens. The Republic of Cyprus is an essential geostrategic partner of the United States and must be treated as such. Cyprus should not be seen as ‘parochial’ or reduced to an ‘inter-communal conflict’, misguided and outdated views that appease Turkey and fail to recognize Cyprus’ strategic importance. Cyprus is the junction point between Europe, Africa and the Middle East, close to Israel, Lebanon and the Suez Canal. We can no longer ignore the geostrategic value of Cyprus.

Furthermore, Cyprus has the potential to play a key role in Europe’s diversification from Russian oil and gas. To this end, Cyprus will play a leading and determining role in the creation of regional infrastructure projects, including the Europe-Asia Interconnector, the Europe-Africa Interconnector and the Eastern Mediterranean Gas Pipeline. Biden’s State Department has displayed an inconsistent policy toward Eastern Mediterranean energy, which only serves to appease Turkey and the Russian Federation. In contrast, I will make Eastern Mediterranean energy a national security priority for the United States and Europe. To this effect, I strongly support the rights of the Republic of Cyprus to develop its significant oil and gas resources in its territorial waters and exclusive economic zone (EEZ), and I oppose any irredentist claims by Turkey on the resources natural resources of the Republic of Cyprus.

The East Med Act has prompted the United States to lift the embargo and it is time to facilitate arms deliveries to the Republic of Cyprus so that Russian-made weapons can be transferred to Ukraine.

Finally, I will also focus on the humanitarian challenges facing Cyprus due to the Turkish occupation, including the issue of “missing persons” following the 1974 invasion, which includes several US citizens. American citizens cannot simply be murdered by foreign military without accountability, and I will work to ensure the recovery of all outstanding American citizens.

Over the past decade, Greece, Israel and Cyprus have established a close trilateral alliance at the government-to-government level, with collaboration in various sectors, including energy, security, trade, defense and people-to-people relations. . . The energy triangle formed by Greece, Cyprus and Israel, together with Egypt, will allow the formation of an Eastern Mediterranean Energy Corridor which will be very important in helping Europe wean off Russian oil and gas. Laws such as the East Med Act created a “3+1” mechanism and made it clear that the United States Congress officially approved this regional alliance. I fully support the “3+1” mechanism and the alliance between the three democracies and pillars of stability in the Eastern Mediterranean, Greece, Cyprus and Israel, and will advocate for additional legislation to further strengthen the frameworks and regional synergies.

RELIGIOUS FREEDOM FOR THE ECUMENICAL PATRIARCHATE

Religious freedom is a fundamental right. Unfortunately, Turkey’s persecution of its religious minorities has become systemic, especially under the rule of President Erdogan, who seeks to destroy Turkey’s traditional secular forces and transform Turkey into a religious fundamentalist nation.

As a member of Congress, I will call on Turkey to respect human rights and religious freedom, especially that of the Ecumenical Patriarch, the leader of more than 300 million Orthodox Christians worldwide. Specifically, I would urge the Turkish government to recognize the legal personality of the Ecumenical Patriarchate, as well as the ecumenical stature and role of His Holiness.

While Turkey is a member of NATO, President Erdogan is deeply rooted in the religio-nationalism of the Muslim Brotherhood. President Erdogan wants to establish Turkey as hegemon in North Africa, the Eastern Mediterranean and the Middle East, and is willing to flout the rules-based international order to achieve this vision.

To this effect, in addition to the occupation of Cyprus and violations of Greek airspace, the Turkish government has engaged in the following provocative actions in recent years:

• Actively support Hamas and the Muslim Brotherhood to the detriment of Israel.
• Transiting mercenaries, including jihadists, into conflicts in Libya, Syria and the Caucasus region, further destabilizing already tumultuous areas.
• Allowing itself to become a transit point for the Islamic State.
• Invade northeast Syria to attack America’s Kurdish allies, the Syrian Democratic Forces.
• Demonstrate hostility toward America’s regional allies, including Egypt and the Gulf States.
• Help Iran evade US sanctions, including through the state-owned Halkbank
• The purchase of Russian S-400 missile systems, which undermines Turkey’s obligations to NATO.
• In 2017, President Erdogan’s bodyguards assaulted American citizens on American soil, bringing Turkey’s authoritarianism to our country.
• Unjustly imprisoning US citizens, including Pastor Andrew Brunson, as well as sentencing an employee of the US consulate in Turkey to a nine-year prison term in 2020 under questionable circumstances.

The previous examples are just a few of the many transgressions of the Turkish government, not to mention Turkey’s democratic backsliding and countless human rights abuses. As such, I fully endorse the decision to withdraw from the F-35 program and would work to block any attempts by Turkey to re-enter the program or obtain F-16s. If Turkey were to buy additional Russian equipment, new sanctions would have to be imposed. Additionally, I support a full Congressional review of US-Turkey relations and wish to determine whether Turkey is in violation of the Arms Export Control Act (AECA), due to its violations of Greek airspace as well than its support for international terrorist groups such as Hamas. Violations of the AECA may result in the suspension of arms sales and the imposition of additional penalties. Finally, I support the decision of Congress and the administration to recognize the Armenian Genocide, and would support other resolutions recognizing the ethnic cleansing of Anatolian Greeks and condemning the Smyrna disaster.