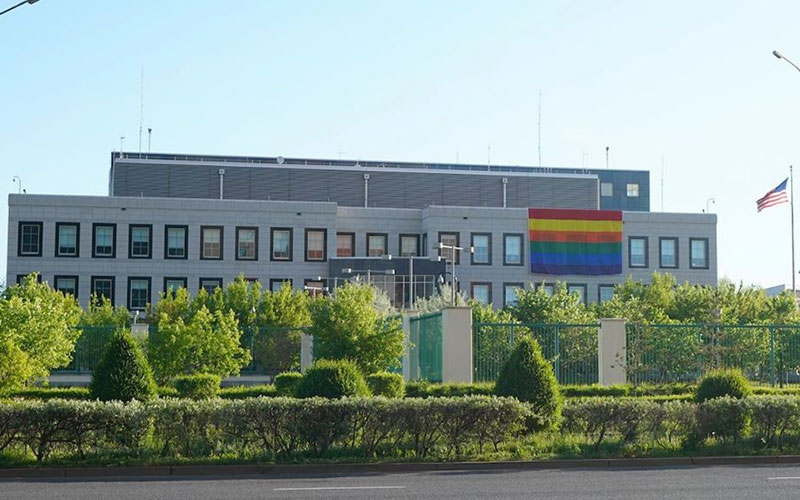 In a demonstration of support for the International Day Against Homophobia (IDAHOBIT), the United States Embassy in Kazakhstan displayed the rainbow flag on the side of the Embassy in Nur Saltan.

Same-sex sexual behavior was decriminalized in 1998 and the right to legal gender reassignment was authorized in 2003, but all other LGBTIQ rights are prohibited in Kazakhstan, including same-sex marriage, adoption, and anti-discrimination laws.

A statement alongside the flag image was proudly posted on the Embassy’s Facebook page.

“Today we celebrate the annual International Day Against Homophobia, Biphobia and Transphobia (IDAHOBiT). In Kazakhstan, as in other countries of the world, many representatives of the LGBTI community remain silent for fear of violence or stigma, ”the United States Embassy noted.

“Human rights are universal and representatives of the LGBTI community are entitled to the same respect, freedom and protection as everyone else. “

The statement was joined by the Embassies of Germany, Greece, Israel, Spain, Italy, Canada, Kingdom of Belgium, Kingdom of the Netherlands, Portugal, United Kingdom of Great Britain and Northern Ireland, Finland, France, Switzerland, Sweden, South Africa, as well as the European Union delegation in Kazakhstan.

The press team for Gay nation love tips from our readers. Do you have any tips or news that you would like to publish? Go here to tell us something.
Visit the Gay Nation store now