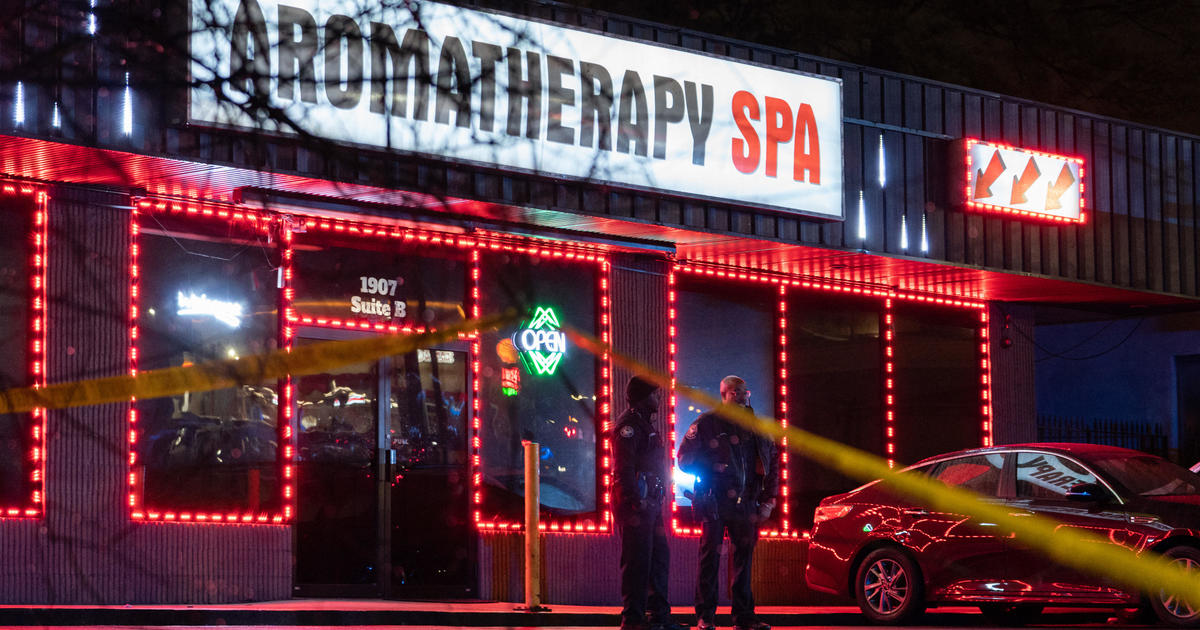 A spate of shootings in Georgia on Tuesday night left many Asian Americans and Pacific Islanders “heartbroken” and “scared.”

Eight people, including six women of Asian origin, were shot dead in three Atlanta area spas, and another man was injured. A suspect, identified as Robert Aaron Long, 21, is in custody for the fatal shooting at Young’s Asian Massage in Cherokee County and two Atlanta businesses, Gold Spa and Aromatherapy Spa, which are across the street from the one from the other.

Four of the victims were of Korean descent, the South Korean Foreign Ministry confirmed to CBS News.

Officials told a press briefing Wednesday morning that the the suspect took responsibility but claimed he was not racially motivated.

“It’s still early days, but he claims it wasn’t racially motivated,” said Capt Jay Baker of the Cherokee County Sheriff’s Office. “He has a problem, which he considers a sex addiction, and sees these places as something that allows him to go to these places, and it was a temptation for him that he wanted to eliminate.”

Vice president Kamala harris, who is the first South Asian woman to be elected to the post, said she and President Biden “mourn the loss.”

“I want to tell our Asian American community that we stand by your side and understand how this has scared, shocked and outraged everyone,” she said.

Adriana Nahjia, the niece of one of the men who was shot, told CBS Atlanta affiliate WGCL on Tuesday, “We never know when we’re in the wrong place at the wrong time.”

“It was, all of a sudden,” she said, adding that he had just stopped at a nearby store on his way home from work when he was shot.

The shootings and their death toll on members of Atlanta’s Asian American community came amid growing nationwide concern about violence targeting Asian Americans and Pacific Islanders. A study released last week found that hate crimes against Asian Americans jumped about 150% in 2020. Women, according to the study, are assaulted about 2.5 times more than men.

The national Stop AAPI Hate coalition tweeted that the shootings are “an unspeakable tragedy”.

“For the families of the victims above all, but also for the AAPI community,” said the coalition. “… Right now there is a lot of fear and pain in the Asian American community that needs to be addressed.”

Asian Americans Advancing Justice-Atlanta called for additional support for those affected by the tragedy. “Now is the time to hold the victims and their families in our hearts and with light,” the organization tweeted.

The National Asian Pacific American Women’s Forum also posted a statement on Twitter: “We are appalled and devastated by the violence in Georgia which has claimed the lives of eight people, including six Asian American women. We mourn with the families of these victims.”

New Jersey Representative Andy kim tweeted that he was heartbroken by the shooting.

“The AAPI community across the country is frightened by these acts of violence,” he said. “We must strengthen our resolve and act against such blind hatred. Tonight, we stand in solidarity with the victims and their families.”

Julie Ae Kim, screenwriter and Queens Borough director for Test and Trace Corps, tweeted that she was “sick in the stomach”.

“I am angry and sad,” she wrote. “It’s the elderly, women, immigrants who are targeted for a reason – because the system leaves them the most vulnerable.” In another tweet, she added, “I am angry with those who played down the violence. I am angry that it has taken so long to be taken seriously.”

The #StopAsianHate hashtag quickly started to catch on on Tuesday night, as people expressed frustration at the lack of action and accountability in the attacks on Asian Americans.

“I’m heartbroken. I’m enraged. I’m scared,” said one individual. noted. “We need more. No more condemnation of anti-Asian racism from us, but above all from our elected officials. No more calling for a hate crime for what it is on the part of the media. No more love. to our communities and to others. ”

Celebrities, including actress, producer and director Mindy Kaling, joined calls for change, with Kaling tweeting that “enough is enough”.

“The targeting of our Asian brothers and sisters is sickening, but not surprising given the normalization of anti-Asian hate speech over the past year,” she said. “We have to #StopAsianHate, that’s enough!”

NBA superstar LeBron James also spoke out, calling the shooting “senseless and tragic” in a tweet who mentioned Aromatherapy Spa in particular.

Many politicians have spoken as well, including Georgian Senators Raphael Warnock and Jon Ossoff. Warnock tweeted Tuesday evening, “My heart is broken tonight after the tragic violence in Atlanta that claimed eight lives. Once again we see that the hatred is deadly. Pray for the families of the victims and for peace for the community.”

Ossoff said in a statement: “As the motive for last night’s terrible violence remains under investigation, I express my love and support and stand in solidarity with the Asian-American community, which has suffered a shocking increase in violence and harassment over the past year. “

Just four days before the attacks, Mr. Biden doomed the climb in hate crimes against Asian Americans in his first prime-time speech to the nation.

“Too often we have turned on each other,” he said. “Vicious hate crimes against Asian Americans, who have been attacked, harassed, blamed and scapegoated.”

California Governor Gavin Newsom was also among the political leaders who condemned the attack, calling the shootings “heinous.” His condition experienced a disturbing influx in violence targeting Asian Americans in recent weeks.

Message from University Leaders on Supporting the Asian American Community