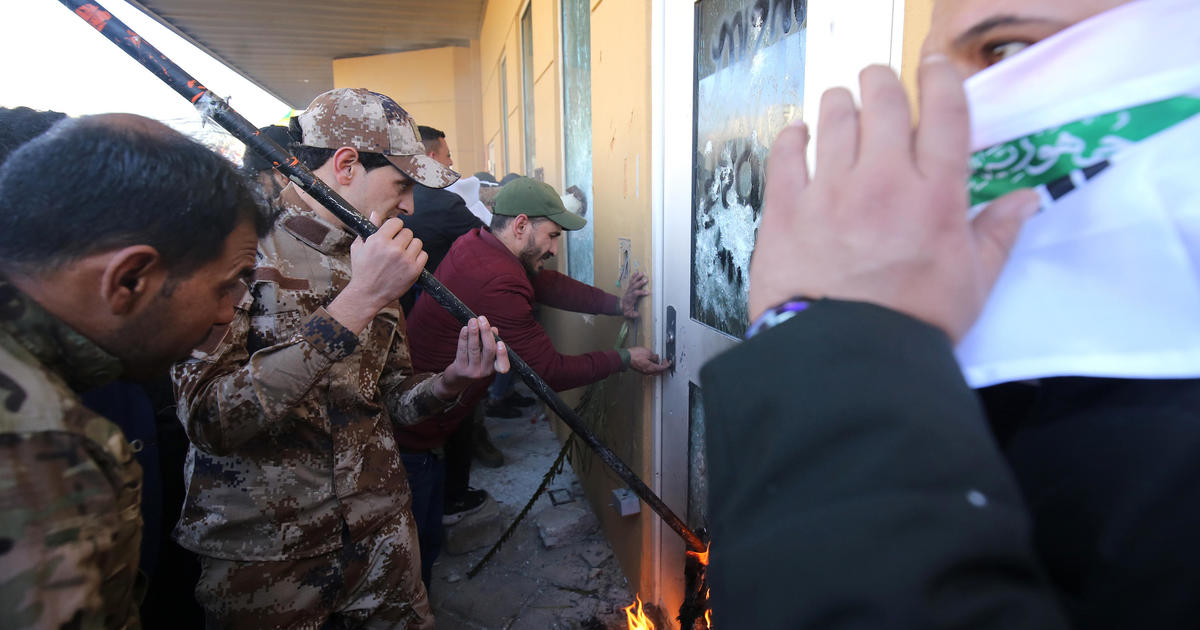 Baghdad – An estimated 6,000 angry Iraqi protesters gathered at the U.S. Embassy in Baghdad on Tuesday, cursing the deadly U.S. airstrikes this week that killed 25 fighters from a Iranian-backed Shiite militias in Iraq. Shouting “Down, Down USA!” Several dozen managed to enter what a senior US official described to CBS News as a reception area just outside the compound after climbing a wall.

The US official told CBS News’s Margaret Brennan that many of the protesters were in fact violent actors sent by militias linked to Iran. The official denied reports that the heavily fortified embassy complex had been breached. Videos posted on social media showed a group of at least two dozen crammed into a courtyard inside the main gate, banging on windows and doors trying to enter the compound.

The United States is sending more troops to protect the embassy compound, the Pentagon and the State Department have said. A US defense official told CBS News correspondent David Marin that the military was sending reinforcements to the embassy from units already in the country.

Defense Secretary Mark Esper said the United States has taken steps to “ensure the safety of American citizens, military personnel and diplomats” and to “ensure our right to self-defense. We are sending additional forces. to support our staff at the Embassy “.

“US personnel are safe,” added a State Department official. “There are no plans to evacuate the Embassy from Baghdad.”

The large crowd earlier destroyed security cameras and torched at least one guard post in the perimeter.

The US military carried out strikes on the Iranian-backed Kataeb Hezbollah militia on Sunday, call it retaliation for the murder last week of a US contractor in a rocket attack on an Iraqi military base which he blamed on the group.

The US attack – the largest targeting a state-sanctioned Iraqi militia in recent years – and the militia’s wish to retaliate, represented a further escalation in the proxy war between the US and Iran play in the Middle East. President Donald Trump tweeted Tuesday morning to defend the US airstrikes and warn that Iran would be held responsible for “orchestrating an attack on the US embassy in Iraq.”

“In addition, we expect Iraq to use its forces to protect the embassy, ​​and therefore notify

US Secretary of State Mike Pompeo met with interim Iraqi Prime Minister Adil Abdul-Mahdi on Tuesday morning and “made it clear that the United States will protect and defend its people, who are there to support a sovereign Iraq and independent, “according to a statement from the department. spokesperson Morgan Ortagus.

Ortagus said Iraqi leaders had “assured the secretary that they take their responsibility seriously and will ensure the safety and security of American personnel and property.”

Senior US official who spoke to CBS News’ Brennan on Tuesday said Iraqi security forces responsible for US embassy perimeter security were “late” at best in responding to planned militia protests supported by Iran.

Videos posted on social media showed the crowd outside the embassy grew as smoke billowed from at least one guard checkpoint on the perimeter of the compound. Iraqi special forces responded by firing tear gas in an attempt to disperse the protesters. Videos on social media showed US troops inside the compound, several of whom appeared to be separated from protesters only by glass.

Reuters news agency reported that US Ambassador to Iraq Matthew Tueller and members of his staff were evacuated from the heavily fortified compound on security grounds as protests raged, but US and Iraqi officials said Tuesday to CBS News that Tueller had already left Baghdad on vacation. leave before the embassy protests erupt. US officials have denied that there was an evacuation of the embassy.

Several senior Iraqi officials went to the embassy compound on Tuesday to try to calm the protesters. In a statement posted on his official Facebook account, Acting Prime Minister Adel Abdul Mahdi urged them to disperse and warned that “any assault or harassment against a foreign embassy or mission is an act that will be firmly repressed by the forces Iraqi security forces, and be severely punished by law.

Mahdi said his government condemned US airstrikes “at the highest level and the government has taken a series of measures to remedy the situation in a way that ensures Iraq’s sovereignty and the safety of its citizens. “.

Security guards were seen retreating inside the embassy. Protesters were also seen hanging yellow flags belonging to the Iranian-backed Kataeb Hezbollah militia on the walls of the embassy.

Pompeo said the strikes send the message that the United States will not tolerate Iran’s actions that endanger the lives of Americans.

The US attack outraged both the militias and the Iraqi government which said it would reconsider its relationship with the US-led coalition – the first time it has said it would do so since an agreement was made to keep some American troops in the country. He called the attack a “flagrant violation” of his sovereignty.

In a partly televised meeting on Monday, Prime Minister Mahdi told Cabinet members he had tried to stop the US operation “but there had been insistence” from US officials.

The US military said “precision defensive strikes” were carried out against five sites of Kataeb Hezbollah, or Hezbollah brigades in Iraq and Syria. The group, which is a separate force from the Lebanese militant group Hezbollah, operates under the aegis of state-sanctioned militias, known collectively as the Popular Mobilization Forces. Many of them are backed by Iran.

The United States maintains some 5,000 troops in Iraq at the invitation of the Iraqi government to assist and train in the fight against the Islamic State of Iraq and Syria (ISIS).

The attack that killed the American entrepreneur and the American counterattacks come as months of political unrest shake up Iraq. Around 500 people have died in anti-government protests, most of them protesters killed by Iraqi security forces.

Iran: crisis in the Middle East

For the latest news and analysis, download the free CBS News app

US deploys additional forces to protect US embassy in Iraq