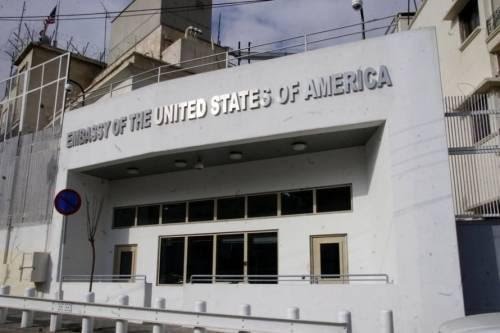 A video clip showed the moment some employees of the United States of America (USA) embassy gathered to leave the country following the US and UK terror alert in Nigeria.

The United States (US) had authorized the evacuation of “non-emergency” employees and their family members to Nigeria.

The US State Department announced the approval in an update to its Nigeria travel advisory on Tuesday evening, October 25.

The update notes that the US Embassy in Abuja will have “limited capacity” to provide emergency assistance to US citizens while the Consulate in Lagos is still providing routine and emergency services.

“On October 25, 2022, the department cleared the departure of non-emergency U.S. government employees and their family members due to the increased risk of terrorist attacks,” the update read.

The notice also said that Nigeria is classified as Tier 3, which means citizens should reconsider their travel to the country.

The evacuation authorization comes days after the United States and the United Kingdom warned of a high risk of terrorist attacks in the Federal Capital Territory (FCT).

However, Information and Culture Minister Lai Muhammed, while reacting to Tuesday’s terror warning, lambasted the British and US embassies in the country, adding that if indeed such a terror warning was necessary, it was for the attention of the citizens of the countries that issued the warning, not the Nigerians.

He accused both traditional media and new media of being complicit in spreading a false statement.

The Minister said that some media outlets and social media personalities are usually caught spreading unverified information on their platforms just for the clickbait and monetary gain from it.

Muhammed said: “Suddenly this terror alert made its way through the media, both new and traditional, creating panic in the country.

“Well, I can assure everyone that our military and other security agencies have continued to do everything possible to secure and protect Nigerians and foreigners living in Nigeria.

“The terrorists were hit hard and put to flight. The bandits were decimated and dispersed.

“Our country is safer today than at any other time in recent times, thanks to the sacrifice of our men and women in uniform.

“We do not overlook the fact that terrorists, bandits and others will always want to do whatever it takes to disrupt the peace, security and stability of our nation.

“But our security forces have been proactive. Nigerians must remain vigilant, but must not panic.

“As I said in a recent statement, when it comes to insecurity, the worst is over for Nigeria,” he added.