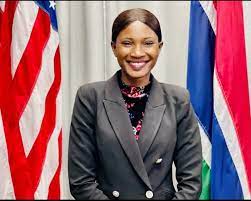 Faoumata Cisay, Strategic Content, Press and Media Coordinator at the U.S. Embassy Banjul spoke for the first time on the controversy surrounding the acquisition of 10 acres of land allocated to the U.S. government to build a new state-of-the-art complex at the United States Embassy, ​​revealing that the embassy is currently following due diligence procedures and will update the public in a timely manner on how much the US government has paid for the land.

The Voice Newspaper contacted the US Embassy through its communications officer Fatoumata Cisay who revealed that the US and the government of The Gambia signed an agreement on October 6, 2022, as a first step towards acquiring of a property for a new American Embassy.

In an interview through Questions Sent to Her, she noted that this agreement allows the US to perform “due diligence” on the site, ensuring it meets all physical requirements. , legal, political, administrative, environmental and technical for the new embassy project. .

“With the agreement now signed, detailed technical assessment work can begin to determine if the site is suitable to achieve our goal. Over the next 16 months, experts from The Gambia and the United States will investigate and assess many factors, including environmental impact, many Gambian and American experts from many technical fields will be involved in the 16-month due diligence assessment phase,” revealed Fatoumata Cisay.

She added, “The United States will work with the people of The Gambia to develop the location in a way that respects and, where possible, enhances the local environment. Our preference is to move forward and develop an environmentally sustainable project that protects and enhances wildlife habitats and becomes an example of global best practice. The land on which WALIC is currently located will be purchased by the United States at an equitable price to be determined through negotiations with the Gambian government.

The US Embassy Communications Officer continued to disclose that the land on which WALIC is currently located will be purchased by the US at a fair price to be determined through negotiations with the Government of The Gambia, adding that this will be known to the public who will constantly update their transparency pledge with periodic updates.

However, prominent Gambian environmentalists and conservationists have since denounced and condemned the Gambian government’s orchestrated decision to allocate 10 acres of land donated to the US government to build the new state of the US Embassy complex in Bijilo. .

Among the environmentalists and conservationists who have raised the red flag are Muhammed Hydara of the Gambia Environment Alliance (GEA), Dr Ahmed Manjang, Famara Drammeh and US-based Gambian environmentalist Demba Baldeh, all of whom have argued that the he allocation of WALIC and part of the Bijilo Forest Park for the construction of the new US Embassy will pose a threat to the lives and livelihoods of the flora and fauna that inhabit the only natural forest cover in the Greater Banjul region.

Former Agriculture Minister Solomon Owens has also recently added his voice to the debate, revealing that the West African Livestock Innovation Center was created by an Act of Parliament and cannot be attributed to the government. American without going back to Parliament for any possible amendment without which he said the land use cannot be changed by the government.

The former Minister of Agriculture speaking in an interview with West Coast Radio-Coffee Time with Peter Gomez recalled that ITC/WALIC was started by former President Sir Dawda Kairaba Jawara and Professor Marking Tyre, a veterinarian renowned through an Act of Parliament in 1982, adding that with Professor Marking Tayell and the difficulties of obtaining funds, stakeholders decided to engage with each other to draft legislation through Cabinet to transform ITC into ITC/WALIC in 2016.

“WALIC is an act of the National Assembly and I think the government needs to be aware that they cannot change their land use like that. WALIC is an international organization, and they have diplomatic status and immunity, if the government wants to change their land use, they have to go back to their stakeholders which include Senegal, Guinea, Guinea Bissau and Sierra Leone and I don’t think they did that,” former agriculture minister Solomon Owens told Coffee Time.

He added: AU-EBA and ECOWAP are also on the board of WALIC and should all be informed of any change in land use and I don’t think they have. Did they change the diplomatic status of WALIC, did they go back to cabinet with a cabinet document to say we are changing the land use of WALIC? I don’t think so because it will mean we end WALIC and I think the US government should be aware of all of this.