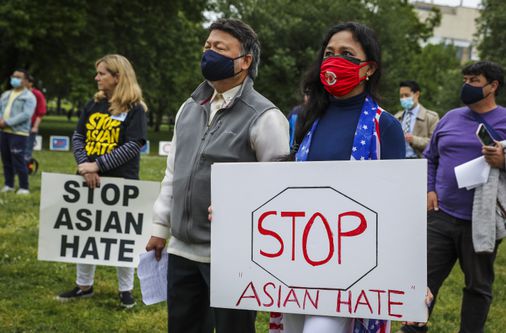 ‘We shouldn’t be silent’: Asian American community in Boston mobilizes against AAPI hatred

Monday’s rally, hosted by the Chinese American Citizens Alliance Boston Lodge, was Boston’s rally for AAPI National Hate Solidarity Day, which coincided with the last day of AAPI Heritage Month. A flagship rally was planned in Washington, DC and other cities across the country.

The rallies come amid a wave of anti-Asian racism and violence – a wave some have attributed to rhetoric used by former President Donald Trump and others by blaming China for the coronavirus pandemic. But anti-Asian hatred is It is also “part of a long and dark history in our country’s treatment of the AAPI community,” Acting Mayor Kim Janey told those gathered on the Common.

“The fires of racism have been burning in our country for far too long, 400 years in fact, and we will not let this last in Boston,” she said.

Although sparked by the grim recognition of violence against Asian Americans, the rally at Boston Common was also filled with joy, with heated remarks, songs and poems written by children, and a traditional dance performance from the Lion.

Many wore shirts or held signs with the words “Stop Asian Hate”.

Susan, from East Boston, who requested to be identified only by first name, attended the rally with her 10-year-old son. She was holding a sign that read “BlacKoreans for Unity”.

“We live in fear,” she said. “We’re here to show him and other kids that there are adults behind him.

City Councilor Michelle Wu, the first Asian American woman to serve on council and candidate for mayor, gave the crowd a handful of concrete steps they can take, including supporting businesses owned by Asian Americans and pushing for language access to government services so that all communities can access the resources they need. they need.

Schools should also teach ethnic studies, Wu added, so that the curriculum reflects the contributions of each community.

“The time has come … to make sure that we are setting the stage from the very beginning of our education system,” she said.

Several elected officials and city council candidates who attended Monday’s rally were called to the stage and urged to pledge to work with the AAPI community to end the hatred.

John Barros, the city’s former head of economic development and mayoral candidate, reiterated the importance of standing together against hate.

“I have served alongside so many Asians, Asian Americans and immigrants,” he said. “They worked incredibly hard and then when they came back to the States they were treated with disrespect and their families were bullied and harassed and hate crimes.”

Many children were in attendance on Monday, and some participated in the rally, a point of pride among many community organizers. Lily Li-Nagy, 6, wrote a poem that she read aloud at the rally. Her mother, Helen Li, said she wanted her daughter to learn from an early age to speak out against wrongdoing.

“Love has no form. It follows its own design. Love can walk in a circle or in a straight line, ”Li-Nagy read. “Love can stumble and stumble. In fact, love will often fall. But love is never alone. Love awaits your call.