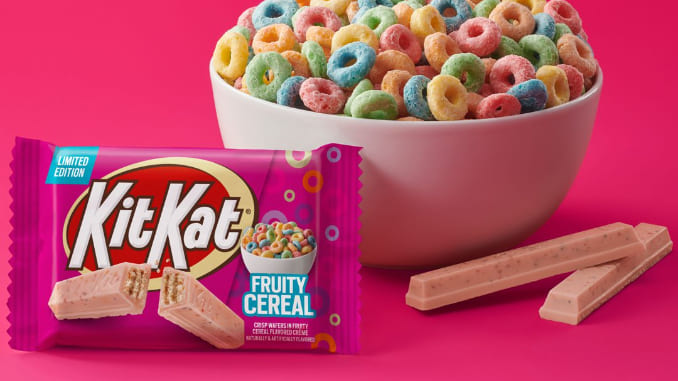 If you’re a fan of the Kit Kat bar in the United States, you’re probably already familiar with its growing popularity in Japan. Maybe you’ve tried the creamy, pale green flavor of matcha or the delicate pink strawberry. In the Japanese market, the Kit Kat has a certain high cultural status. As Tejal Rao illustrates in a story 2018 for the New York Times magazine:

“In Japan, you might find the Kit Kat in a pharmacy, but here the Kit Kat has levels. The Kit Kat has reach. It can be found in department stores and luxury Kit Kat boutiques that look like high-end shoe stores, a single ingot with a peelable silky sheath, stacked in slim boxes and hidden in ultra-soft-opening drawers, which are well-dressed, multilingual seller slides open for you while you navigate.

We are talking about elegance. Soft opening drawers. Sophistication. Rao goes on to explore the proliferation of Kit Kat across Japan since its introduction there in 1973 and the role of novelty flavors in its success. In 2000, Nestlé (which owns Kit Kat in Japan) developed the first new flavor, Strawberry, which became a smash hit. A few years later, the company brought in pastry chef Yasumasa Takagi to keep the momentum going. Kit Kat is now permanently available in the country in seven flavors: milk chocolate, dark chocolate, strawberry, sake, wasabi, matcha and Tokyo Banana, a collection that manages to be creative and measured at the same time. Overall, the flavors are balanced and elegant; even the bolder options like sake and wasabi are understandable in their uniqueness.

While a few of the Japanese flavors are reliably imported into the US and available at specialty grocery stores like H Mart, I’ve recently started noticing new American flavors at regular Brooklyn convenience stores: Key lime pie , for example, or a chocolate “duo” mint or blueberry muffin (??).

What is the problem? I was wondering. Is the American Kit Kat trying to catch up with the Japanese Kit Kat? Are we on our way to the luxury Kit Kat boutiques in the United States? And, most importantly, what gives me the distinct feeling that, despite our best efforts, the American Kit Kat will never reach such sophisticated heights as its Japanese counterpart?

Turns out, America has its own list of novelty flavors that are always available. It includes your regulars: milk chocolate, white “cream” and dark chocolate. Then there’s a slew of two-tone, dual-flavored bars: Kit Kat DUOS Dark Chocolate Mint, Kit Kat DUOS Dark Chocolate Strawberry, and Kit Kat DUOS Mocha + Chocolate (although “mocha” already implies chocolate; I guess they didn’t realize). Rounding it all off is the “THiNS” Chocolate Hazelnut Kit Kat: a flatter, thinner Kit Kat with just two layers of wafer instead of the usual three. There are also limited edition flavors – at the time of writing these include Key Lime Pie, Blueberry Muffin and Fruity Cereal.

Taking a moment to compare this list to the Japanese list, you might think it is significantly more, shall we say, complicated. American Kit Kat is a separate company from Japanese Kit Kat – here the brand is owned by Hershey. While the mere fact of their separation may explain different approaches to flavor development, my bet is on something cultural. That handful of DUOS, THiNS, and over-the-top recreations of things that were already multi-note candy to begin with (key lime pie chocolate bar ?) is a perfect image of our American maximalist tendency to “innovate” into oblivion. Compared to its straightforward Japanese counterpart, the American roster isn’t just stylistically clunky horror, but a relentless mastery of novelty.

It could be so simple: what about peanut butter? raspberry? – but American Kit Kat is making it difficult, asking consumers to figure out and buy two new candy sub-brands without establishing a solid foundation. Getting DUOS and THiNS spinoffs into the permanent flavor canon before any interesting single-flavored standard Kit Kat has a place there is chaotic and disorienting. The brand has overstepped the mark, jumping too fervently in an attempt at creativity and shaking up the simplicity that makes the Kit Kat special.

While the STRAWBERRY & DARK CHOCOLATE DUO was the most edible of the bars I tried, its texture was waxy and the two flavors didn’t blend together to achieve anything more than the sum of their parts.

Conceptually, THiNS really deserves a dedicated thesis. Kit Kat THiNS is part of a suspicious trend among many candy and snack brands to create a compressed, more lifeless version of their product. Take OREO Thins or Ritz “Crisp & Thins,” for example. While hazelnut would have been a great flavor for American Kit Kat to add to their permanent offerings, we’d be wise not to accept THiNS as a vehicle. Can it be anything but a ploy to sell substantially fewer products for the same amount of money while evoking health consciousness despite it still being, let’s not forget, literal candy?

Outside of the DUO whirlwind and THiNS mayhem, what about the Special Edition flavors, which we can assume are likely market tests for permanent status? It’s true that limited releases aren’t entangled in the mess of sub-brands, but their problem is part of the same excessive and maximized tendency to innovate. Take risks! Do the unexpected! And again, they went too far: the overzealousness is palpable. Take the fruity flavor of cereal. Fruity cereals are already artificially flavored in real life. One more transmutation into a candy bar does us a disservice; the result is sickeningly sweet that sticks miserably inside the mouth. Key lime pie is plagued with a terrible artificial citrus like cleaning agent and is both worse than a real key lime pie and worse than a regular chocolate Kit Kat. Lose-lose, lose, lose, lose.

There’s nothing wrong with chasing complexity. Achieving complexity is understanding nuances, layers and complexity. But there’s a line between complex and complicated, and American Kit Kat falls on the wrong side. While wasabi and matcha bars line the drawers of Japanese Kit Kat stores, THiNS chocolate hazelnut and DUO mocha + chocolate seem better suited for a concession stand at the football game, next to the Coors Light with ice cream. color changing thermochromic ink in box and 3D CRUNCH Chili Cheese Nacho Doritos.